The nature of evil is difficult to contemplate, and even harder to visualize.  Movie villains often have clear motivations that are spelled out explicitly.  The audience is made to understand how and why they came to be.  The audience is also made to understand what their goals are, and just how they plan to go about getting them accomplished.  Such rules are considered mandatory for proper storytelling.  However, backstory and exposition are sometimes unnecessary.  An effective villain can simply be a force of nature, with no rhyme or reason as to his existence or actions.  The most horrible acts often occur without the benefit of logical explanation.  The horror genre, which is a great medium for examining mankind’s collective fears, has many examples of how such characterizations can be employed to optimum effect.     In 1978, writer/director John Carpenter offered a vision of evil that revealed it to be a faceless, emotionless void.  It was simply titled Halloween. 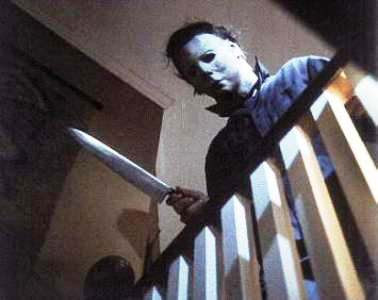 On Halloween night, 1963, a horrible tragedy befalls the Myers household.  Eight year old Michael suddenly and inexplicably stabs his teenage sister to death.  He is then placed in a sanitarium, where he spends the next 15 years of his life in a state of impenetrable catatonia.  Psychiatrist Samuel Loomis (Donald Pleasance) takes pity on the troubled young boy, making several attempts to connect with him.  His efforts prove fruitless as Michael proves beyond treatment of any kind.  Fifteen years later, on the night before Halloween, Michael suddenly reanimates.  He escapes captivity and returns to his old neighborhood.  On Halloween day he begins stalking a meek, virginal teenage girl named Laurie Strode (Jamie Lee Curtis).  Laurie begins to sense that she is being followed, but her suspicions are immediately dismissed by her friends.  As day turns to night, Laurie quietly performs her babysitting duties while her friends indulge their raging hormones.  As they will all find out, Michael Myers initial crime was not a random, isolated occurrence.  It was the beginning of a murderous spree, one that he means to continue on that very night.

Halloween was initially conceived when producers Irwin Yablans and Moustapha Akkad enlisted filmmaker John Carpenter’s help in crafting a commercial horror picture.  They were quite taken with Carpenter’s Assault on Precinct 13 and thought him to be the right man for the job.  Per their request, Carpenter and his then girlfriend Debra Hill drafted a screenplay titled The Babysitter Murders. In order to maximize the film’s commercial chances, Yablans suggested that the screenplay be set on Halloween night and named after the holiday as well.  The meager budget and tight shooting schedule did not allow for extravagant production values.  This was evidenced by Michael Myers wardrobe.  The screenplay vaguely described his mask as having 'the pale features of a human face.'   Taking that description into account, Production designer Tommy Lee Wallace purchased a William Shatner mask for a mere $1.98.  He then spray painted it white and enlarged the eye holes, giving it a ghostly, mannequin-like appearance.  Evil now had a visage.

Outfitted with nothing but the aforementioned mask and wielding a butcher knife, Michael was a blank slate in every sense of the phrase.  He spoke not a single word through the duration of the film.  His movements were robotic, revealing nothing in the way of personality or expression.  Bladed weapons and firearms have little to no effect on him.  His amazing strength and seeming imperviousness to physical damage are never explained.  Like Michael himself, such attributes just simply are.  Upon seeing him, his victims simply freeze and/or shriek in terror.  They make no attempt to plead or bargain with him.  His figurative and literal blankness discourage any attempt at human connection.  He is a void of emptiness, devouring anyone he comes in contact with.   He is the enigma that drives the film, and undoubtedly a key part of its unprecedented success.  Halloween made the slasher genre commercially viable.  Its influence extends all the way to the sci-fi and action genres.  The Terminator, as envisioned in the original film is a distant cousin of Michael.  Like him, the T-800 personifies not only death, but the inevitability of death.  It can be postponed, but never cheated or stopped.  It will clear any obstacle in acquisition of its target.