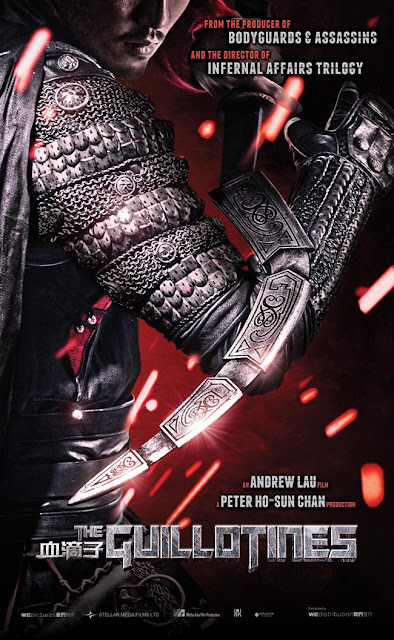 A remake of Master of the Flying Guillotine is indeed an intriguing prospect, though it will surely be weighed down with excessive CGI (Especially when considering how low tech the weapon in question is).  Producer Peter Chan certainly thinks so, which is why he has weathered one setback after another to bring The Guillotines to the screen.  What started out as a mere remake has morphed into something considerably bigger.

The Guillotines focuses on the fabled Guillotines.  They are an elite group of warriors, each highly proficient with the weapon their squad is named after.  Under the rule of Emperor Yong Zheng, they tirelessly served the Manchurian-ruled Qing Dynasty as assassins.   However, Emperor Qian Long means to usher in a new age, as he is quite taken with the weapons and technology of the western world.  Still, he continues using the Guillotines as something of death squad, ensuring that his reign goes unchallenged.

The Guillotines are charged with apprehending the infamous Wolf and his Shepherd Gang.  Their mission ends in failure, resulting in the capture of their leader.  Seizing the opportunity, Emperor Qian dispatches Agent Du to dispose of both the Wolf and the Guillotine Squad.  The demise of the Guillotines will allow firearms to proliferate under the rule of Emperor Qian.

The premise of the film makes it sound like a deconstructionist chop-socky.  Shaw Brothers by way of Sam Peckinpah’s The Wild Bunch.  Amidst a changing landscape and evolving technology, a group of warriors find themselves without use or purpose in the new regime.  Forced to either adapt or die, they face the onslaught head on.  In the right hands that could be one hell of a movie.

The new poster for The Guillotines does not reveal whether or not the film is indeed a self-conscious deconstructionist work.  However, it does provide a glimpse of the title weapon, as reimagined by director Andrew Lau and company.  It looks like a cross between the eight diagram pole and Indiana Jones bullwhip.  Judging by the color scheme, which emphasizes dark red, there will be ample amounts of CG blood.  The armor design suggests that the Guillotine Squad will be Medieval Hong Kong’s answer to the Knights of the Round Table.  Altogether, the poster recalls that of the first Blade film.  A deconstructionist martial arts film done in the style of the Daywalkers inaugural film would truly be a thing of beauty.
Posted by Unknown at 7:00 PM