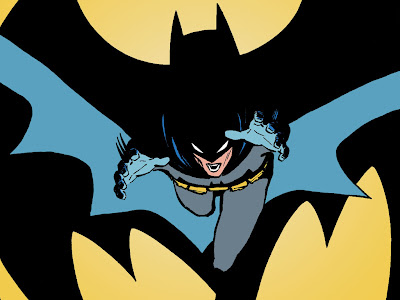 Batman: Year One is an adaptation of Frank Millers now famous story arc, which originally appeared in the pages of Batman issues #404-407.  It has since become accepted as cannon, especially among those who consider Miller’s take on the character to be definitive.  It has been reprinted numerous times in trade paperback form.  It was also a primary source of inspiration for both Batman: Mask of the Phantasm and Batman Begins.  It now receives its most complete and faithful adaptation to date courtesy of The DC Animated universe.  While the animated version is neither as cohesive nor as resonant as its source material, it manages to be an aesthetically accurate representation of the comic.

One of the most memorable elements of the comic, aside from its groundbreaking story, was the artwork. David Mazzucchelli and Richmond Lewis envisioned Gotham as a city in the throes of an extended Dark Age.  Gotham’s very spirit was being drained by parasites of all kinds.  The animated version remains true to that aesthetic, offering perhaps the most subdued character designs yet to emerge from the DCAU.  Batman: Year One successfully creates a world that seems to exist in some sort of mythic time warp.  Gotham City is an animated stand in for old New York or old Chicago.

The action consists mostly of small scale fight scenes and car chases (Though a confrontation with Cat Women lasts a bit longer than is necessary).  The fight choreography is neither as intricate as that of Justice League: Crisis on Two Earths or as exceedingly brutal as that of Batman: Under The Red Hood. It’s actually fairly consistent with the brand of violence found in the classic black and white Warner Brothers gangster films, if a tad more bloody.  The viewer is constantly reminded of Batman’s mortality, as he sustains multiple gun-shot wounds and other injuries. The Gotham PD’s siege on a dilapidated building provides the film’s major action set piece.  The caped crusader does not have the luxury of his trademark high tech gadgets, giving the sequence a primal feel.

If there is one element that didn’t survive the transition, it’s the cohesiveness of Frank Millers storytelling.  On the comic page, Batman: Year One played out fluently.   In its animated form, it feels just a tad disjointed.  It plays like a series of vignettes tied together by a common theme, mood, and setting.  The passage of time is marked by calendar dates that appear on the top left corner of the screen at appropriate intervals.  It feels episodic, like detailed log entries.  In major deviation from the source material, the voice over narration is used sparingly.  That seemingly minor change robs the proceedings of a certain intimacy.  In the comic, Frank Miller’s liberal use of captions and narration served a dual purpose: it conveyed vital information to readers while allowing them to get inside the characters thoughts and feelings.

In perfect keeping with its source material, Batman: Year One owes a considerable debt to classic Hollywood film genres such as film noir, westerns, and police procedurals.  It pays ample tribute to those time honored forms, while showing proper respect to the material.  It offers a stripped down, no frills take on an iconic character that radiates with authenticity.  Though it's not exactly perfect, the positives far out weigh the negatives, making Batman: Year One a worthy addition to the DCAU catalog.