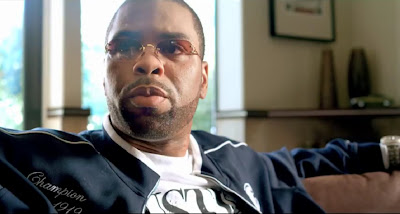 While spending a leisurely day at the crib, Method Man and his crew watch a cooking show on the flat screen.  One of his boys voraciously tears into a bag of Sour Patch Kids candy and accidentally scatters the contents all over the living room.  Meth scolds him, after which the candies come magically to life and commence to wreaking havoc all over the house.  As a series of inexplicable accidents and strange phenomena begin to occur, no one suspects the obvious.  Amidst the chaos, Meth busts a rap that celebrates the mischievous nature of these sweet and sour delights.

The song itself practically begs not to be taken seriously.  Mischievously sinister keys take baby steps atop a slow, pulsating bounce.  It’s like a slowed down, synthesized rendition of “Chopsticks” complete with medium sized 808 kicks.  Its sonic junk food, perfectly tailored for the product it advertises.  Meth’s lyrics are suitably irreverent.  He raps as though he is a child who was just made privy to a time honored myth.  He describes the candies as bite sized, sugar flavored ninjas that hide in any available crevice and live to cause trouble.  He also describes losing them as cardinal sin with dire consequences, the results of which are witnessed in the accompanying video clip.

Computer generated Sour Patch Kids are shown emerging from beneath magazines and in between sofa cracks.  They then engage in all manner mischief: toppling salt shakers, cutting Yo-Yo strings and setting off car alarms.  Hilariously, they even mess with the mixing board levels during one of Meth’s recording sessions.  Such visuals, coupled with the silly yet cautionary tone of Meth’s lyrics, immediately bring to mind Joe Dante’s classic “monsters-on-a-rampage” masterpiece Gremlins.  While “World Gone Sour” isn’t nearly as dark or memorable as that film, it exudes a similar sense of fun.

“World Gone Sour (The Lost Kids)” is so light and insubstantial that even the most curmudgeonly Wu-Tang fan could scarcely be mad at it.  Method Man has been a pitch man since the mid 1990’s, so seeing him selling someone else’s wares in a commercial is hardly new.  Every hood has kids, and kids love candy.  Back in 1995, Meth and his fellow clansman were doing ads for malt liquor.  While both are unhealthy, I’ll take sugar over alcohol any day of the week.    If you’ve ever bought a syrupy sweet fruit flavored soda to go along with your ham and cheese hero, you can relate. Word to Willy Wonka and the Oompa-Loompas.