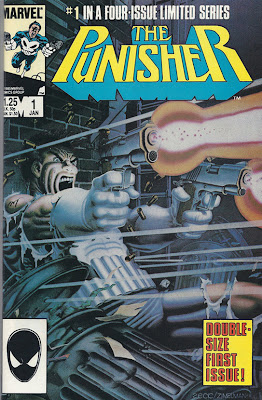 In the beginning of "Circle of Blood," The Punisher’s one man war on crime was been brought to an abrupt halt.  He has finally been apprehended and is being held in Ryker’s Island, surrounded by any number of inmates who have a vendetta against him.  After being double crossed during a failed prison break, the Punisher is offered tempting proposition by the warden.  He will be allowed to escape, so long as he agrees to head up a squad of vigilantes funded by a private organization known only as The Trust.  Now back on the streets, The Punisher orchestrates a turf war among the New York’s various criminal factions.  He hopes this will cause New York’s underworld to cannibalize itself and implode, but it simply results in unnecessary bloodshed.  While trying to bring the warring parties to a peaceful resolution, The Punisher realizes that the Trust’s intentions do not line up with his own.

Spurred on by such phenomena as the crack epidemic and the war on drugs, national crime rates skyrocketed throughout the 1980’s.  Right wing pundits proposed a “get tough on crime” strategy to galvanize voters.  This sentiment was reflected in the popular entertainment of the day.  The public was indeed ready for a character like the Punisher to receive his own monthly title.  Yet, Marvel was initially skittish about doing so for its lone executioner.  “Circle of Blood” was very much in the vein of contemporary action films.  The story begins in the bowels of Ryker’s Island and gets more violent as it progresses.  Its protagonist did not do battle with flamboyantly costumed villains.  He performed hits on Mafia dons and the like.  Not to mention that the Punisher himself was a rather sullen and distant character.  He had no pretensions toward heroism.  Like many of the cinematic anti-hero’s of the period, he was a Vietnam veteran, compelled to rid the city of scum after his own family was slaughtered during a gangland dispute in central Park.

The artwork of Mike Zeck made Frank Castle come alive as never before.  He outfitted the character with a bodybuilder’s physique that wouldn’t at all have been functional in the real world, yet that’s exactly what it was on the comic page.  The Punishers broad, skull clad frame truly inhabited each panel from a spatial standpoint.  Zeck also infused him with mood and presence.  His furrowed brow and curled lip channeled Dirty Harry Callahan, Paul Kersey, and John Rambo all at once.  Supporting it all was Steven Grant’s writing, which set up The Punisher as the proverbial man of few words.

“Circle of Blood” was published over the course of five issues during the first half of 1986.  The character was enthusiastically embraced by readers, leading Marvel to give him his own ongoing monthly title the following year.  Throughout the late 1980’s and early 1990’s, the Punisher’s grim visage would grace no less than three ongoing monthly titles.  By 1995, public demand for the character had diminished considerably.  He was successfully resurrected five years later by Garth Ennis, who offered perhaps the most satisfying iteration of the character yet.  He’s also been the subject of three feature films, none of which managed to capture the basic appeal of the character.  “Circle of Blood” is where it all started.  It was the perfect comic at the perfect time.  Beware the Punisher. 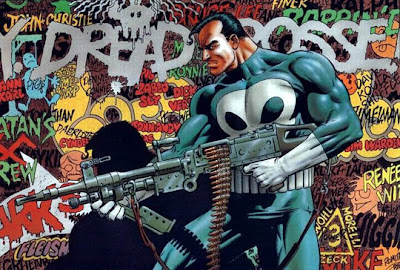