Characters in movies often exhibit a flare for the theatrical when committing acts of violence.  Such grandeur is often facilitated by various filmmaking techniques.  One imagines that real life sociopaths, especially the ones who do violence for a living, often go about their business with a certain measure of casual detachment.  After all, for them it’s just a job.  Curiously, the sometimes ultra-violent works of Japanese actor and filmmaker “Beat” Takeshi Kitano seems to exhibit both emotional intensity and deadpan indifference all at once.  Half of his face was paralyzed in an August 1994 motorcycle accident, diminishing his range of facial expressions considerably.  He sometimes plays characters that inflict unspeakable physical damage on their enemies, yet betray nothing in the way of an emotional response to the carnage, be it disgust or gratification.  His latest gangster opus, Outrage, seems to continue this curious tradition. 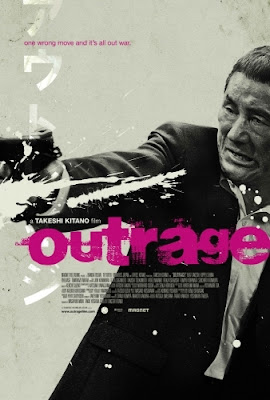 Outrage tells the story of Ôtomo (Takeshi Kitano), an Ikemoto-gumi associate charged with the task of organizing the unassociated Murase-gumi gang under the banner of the Sannokai crime syndicate, which controls the Kanto region of Japan.  The order to do so comes from none other than the undisputed Sannokai boss Sekiuchi (Kitamura Soichiro), and must be carried out under pain of death.  If Sekiuchi’s edict is not heeded by all, bloodshed will indeed result.  Suffice it to say, Ôtomo has no reservations whatsoever about dispensing Yakuza style justice.

As expected, the red band trailer for Outrage emphasizes the film’s unspeakable violence.  Assassinations abound.  Characters are slashed, shot execution style, and blown to bits.  In one cringe inducing moment, Ôtomo uses a dentist’s drill in a most unintended manner.  Another characters ear drum is impaled with a set of chopsticks. Through it all, Takeshi Kitano’s poker face remains disturbingly intact, even as the tone and intensity of his voice increase.  There are a few moments where the left hand corner of his mouth grimaces, seemingly at war with the rest of his face.  It’s unsettling and fascinating all at once.  His face says one thing, but his voice, actions, and body language say something else entirely.

The trailer for Outrage doesn’t exactly convey all the necessary information.  It’s obviously a gangster film, and a fearsome one at that.  But the clip plays as a rapid succession of bloodily violent images juxtaposed with the stylishness associated with modern crime films.  At this point, perhaps Magnolia Pictures figures that fans are so familiar with the tropes and conventions of the genre that the actual story is immaterial to them.  Though I loathe to admit it, such sentiments aren’t too far off the mark.  This trailer hits all the right beats, and Mr. Kitano seems to know exactly what Western voyeurs such as myself crave from films such as Outrage.