Batman is perhaps the most durable and endearing of all superheroes.  He can sustain any number of interpretations, no matter how disparate.  He can also weather the fallout when said interpretation becomes passé, leaving his legacy in tatters.  The character is consummately iconic, so much so that he continues to inspire any number of fan films despite the massive success of his most recent cinematic incarnation.  Interestingly, though Christopher Nolan’s version of Batman is arguably the most widely accepted to date, fans still look to Tim Burton’s vision for inspiration when crafting their own batman films.  Sometimes, they combine elements from both to create an amalgamation of the two. 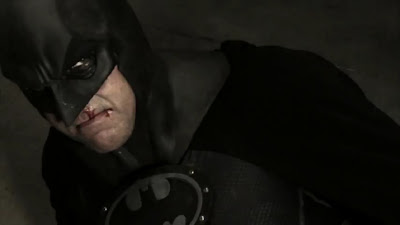 Seeds of Arkham opens amidst a conflict.  The demise of the Joker has left a huge void in the Gotham city underworld.  The remaining members of Batman’s (Kevin Porter) rogue’s gallery are now jockeying for position.  As the tectonic plates of Gotham gangland shift beneath his feat, Batman struggles to keep abreast of his enemies movements.  His investigation leads to a warehouse, where he is immediately assailed by a cache of heavily armed thugs.  His ordeal is just beginning, as both friends and foes wait in the wings to challenge him.

Seeds of Arkham plays like a single entry in an ongoing adventure serial, complete with a cliffhanger ending.  It drags it’s hero through the proverbial ringer, forcing him to face one enemy/obstacle after another in an extremely short period of time.  In that sense, it resembles the pacing and style of the Indiana Jones films, albeit in an industrialized and urban setting.  It allows Batman no rest, and maintains a consistent level of energy throughout.

Interestingly, Seeds of Arkham acknowledges both cinematic incarnations of the Dark Knight.  It uses the Batmobile from the Tim Burton films (The first of which had a decidedly retro feel), while allowing it’s thugs to wield late model submachine guns.  At first, the clashing of aesthetics is a bit jarring.  The 1989 Batman had its thugs wearing trench coats and fedoras while brandishing old fashioned Thompson machine guns.  Meanwhile, the thugs and henchmen of the Nolan films exist firmly in the present day.  The makers of Seeds of Arkham have crafted something of a compromise between the two.

Throughout the 1990’s, many comic book artists presented Batman as having a perpetual five o clock shadow that would make Fred Flintstone jealous.  Perhaps this was thought to be in keeping with the grim and gritty image popularized by the works of Frank Miller.  It did its job a bit too well, making Batman look like some sort of reclusive psychopath.  That template serves as inspiration for Batman as envisioned in Seeds of Gotham.  He looks more like a crazed, drunken night brawler than a dark avenger.  However, this presentation does add to the intensity of the proceedings.  Batman looks like he really wants to rip into these guys.

The fight scenes remain true to the brawler/melee aesthetic portrayed by Batman’s appearance.  This is especially evident during Batman’s fight with Killer Croc (Xango Henry), who resembles Deebo from Next Friday.  Batman first engages Croc with a street boxing style complete with round house punches.  When his efforts fail, he begins to evade his opponent, using his surroundings for cover.  This is consistent with tactician often shown in the Batman comics throughout the years.  Batman doesn’t always use mere brute force to overcome his opponents.  Christopher Nolan would do well to remember that.

Seeds of Arkham is not anymore of a definitive version of Batman than the films of Burton or Nolan.  It takes its inspiration from a particular version of the character and adds the necessary embellishments.  I admire its aggression and spunk.  Like its protagonist, it’s chomping at the bit for a good scrap.  That being said, I’m not sure if this Batman is the kind of character that could sustain a feature length film.  This guy seems like he’s using the cape and cowl to work out his aggression and indulge his inner sadist.  Still, this is a solid effort from Aaron Schoenke.