Hood films have never been known for their subtlety.  Even the best ones often hammer their points home.  They have always fallen squarely on the nurture side of the nature vs. nurture argument.  Most explanations for criminality are often spelled out in the most overt and expository manner possible.  It’s as if the filmmakers don’t trust the audience to come to the appropriate conclusions on their own.  Still, somewhat vague and ambiguous characterizations sometimes slipped through the cracks.  The randomness of street crime dictates that not every murder has a clear or logical motive.  Any otherwise “realistic” movie about the streets would be somewhat dishonest if it ignored such a fact.  In the midst of the hood movie onslaught of the early 1990’s, a future Hip-Hop legend would be cast as one of hood cinema's definitive sociopaths. 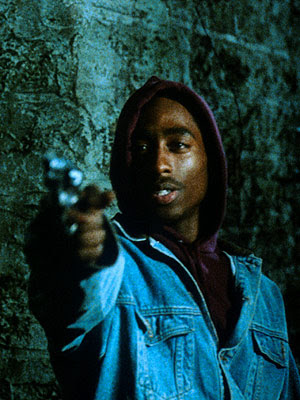 Juice focuses on the lives of Bishop (Tupac Shakur), Q (Omar Epps), Raheem (Khalil Kain), and Steel (Jermaine Hopkins). The four Harlem teens playfully dub themselves “The Wrecking Crew.”  Their days are rarely spent in school.  They divide their time between hanging out in pool halls and wandering the streets.  They endure frequent intimidation by a Puerto Rican gang lead by the young Radames.  Growing weary of how “The Wrecking Crew” has little to no presence on the streets, Bishop and Raheem come up with a solution: rob the local bodega and its owner, the troublesome “Old man” Quiles.  The score will provide them with some quick cash and establish them as a force to be reckoned with.  However, what should be a simple robbery takes a very wrong turn when Bishop’s Napoleon complex comes bubbling to the surface.  His quest for power ultimately tears the crew apart.

Juice was one of a number of films in the early 1990’s that would play a part in shaping the emerging hood film subgenre.  It was directed by Ernest Dickerson, who had previously served as Spike Lee’s director of photography.  Like Boyz N the Hood, it was essentially a coming of age tale with a dash of tragic violence thrown in.  Unlike Boyz, it didn’t tug so obviously at the audience’s heart strings.  It took its inspiration from the likes of Martin Scorcese’s naturalistic crime film Mean Streets.  The milieu was changed from Little Italy to early 90’s Harlem and the soundtrack was changed to Hip-Hop.  Tupac Shakur, then known mostly for his happy-go-lucky verse on Digital Undergrounds 1991 single “Same Song,” was cast as Bishop.  He won the role over Naughty by Nature’s Treach and Digital Underground’s Money B.  By the time the film was released, 2Pac’s debut, 2Pacalypse Now, had only been in stores for a couple of months.  It wasn’t setting the charts on fire, but songs like “Brenda’s Got a Baby” were getting love in the streets. 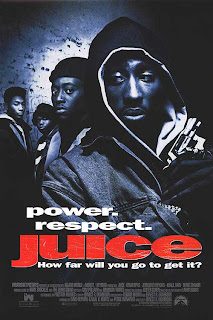 As played by Tupac, Roland Bishop was a force of nature akin to Michael Myers.  No particular reason is given for his murder spree save for his self-espoused thirst for power.  The movie offers a vague clue into his home life in a small scene which shows his jailbird father catatonically staring into the television.  The Wrecking Crews acquirement of a snub nose revolver provides Bishop’s id with the necessary catalyst for his violent tendencies.  He finds that he has the ability to kill without regard or conscience.  Even fellow crew members are not safe from his wrath.  Tupac, in his feature film debut, inhabits the role with every fiber of his being.  His eyes have a hollow vacancy, and the pistol becomes like an appendage to his hand.  Bishop and his gun are unmistakably one.  His descent into sociopathic behavior is all the scarier because it is not adequately explained.

Aside from 2pac’s performance, and the exceptional soundtrack album, Juice was rather unremarkable.  The character of Roland Bishop is an essential building block of 2Pac’s mystique.  Despite the Black Militant imagery of his debut, Pac’s contradictions had many wondering just what to make of him.  Roland Bishop offered a very clearly defined manifestation of his dark side.  For better or worse, the shadow of Roland Bishop still looms large within 2Pac’s legacy.  He is the very definition of seemingly pointless and misdirected rage.