Modern superhero movies often portray scientific accidents as a form of rebirth.  While there is a very obvious downside to becoming a superpowered freak, there are certainly a great number of advantages as well.  Peter Parker has an acute sixth sense that alerts him to danger, and he can lift many times his own body weight.  Bruce Banners gamma fueled temper tantrums make him one mild mannered nerd that anyone would be afraid to piss off.  If Stan Lee and his stable of artists wanted to take an even more disturbing approach to that material, they might have portrayed such bizarre scientific blessings as a full on curse, A disease which slowly transforms the human body into something truly hideous.  In August of 1986, a daring Canuck filmmaker did just that by offering a disturbing new take on a classic horror film. 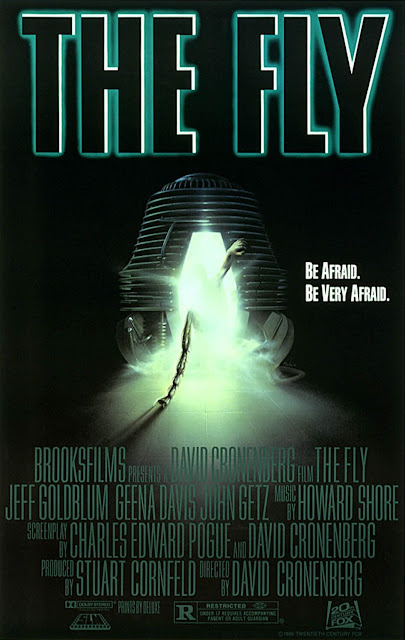 Seth Brundle (Jeff Goldblum) is a brilliant but eccentric scientist who is on the verge of a historic breakthrough.  He has developed a pair of “telepods” that can teleport matter from one location to another in the blink of an eye.  He reveals their existence to the beautiful journalist Veronica Quaife, who eventually takes a liking to him.  As their romance begins to blossom, Brundle ponders how to successfully transport living matter in the telepods.  His first attempt ended in gruesome failure.  After making the necessary adjustments, Brundle uses himself as guinea pig.  His experiment proves successful, except for one minor but ultimately important detail: A common housefly hitched a ride at the starting point. Unaware of the tiny stowaway, Brundle emerges from the second pod with a feeling of rejuvenation.  His newfound euphoria soon gives way to horror, as he gradually morphs into a grotesque human/insect hybrid.

The original 1958 version of The Fly was limited by the technology and moral standards of the time.  By 1986, the MPAA’s ratings system had given filmmakers considerable leeway as far as gore was concerned.  Likewise, advances in technology had allowed special effects technicians to render the destruction of the human body more accurately than ever before.  Canadian filmmaker David Cronenberg would take full advantage of the relaxed social mores and advanced visual effects that had become common place by the mid 1980’s, using both to the fullest extent.  He was well suited to the task, as his resume up until that point consisted of films in which the human body played host for all manner of physical and psychic terrors. He was also adept at using such imagery to comment on the human condition.

Make up FX wizard Chris Walas was charged with visualizing the merging of man and insect.  He and Cronenberg decided to portray Brundle's metamorphosis in a series of stages, each one more ghastly than the last.  Brundle would start out human, but by films end would be an ungodly monstrosity.    A stand out among the films staggeringly grotesque moments is the infamous “vomit-drop.”

The elaborate makeup and animatronic FX posed the danger of upstaging the story and characters.  Fortunately the screenplay by Cronenberg and Charles Edward Pogue assured that the human elements remained intact.  It was equal parts allegory, character study, and tragic love story. Brundle’s predicament would not only ravage his body and his psyche, but take an amazing toll on his relationship with Veronica.  Goldblum and Davis also do their part to preserve the more fragile parts of the story.  Seth Brundle is as sympathetic a protagonist as has ever occupied a horror film.  His growing horror at his situation begins to mirror that of the audience.  Veronica’s concern for him feels real, even when her devotion stretches credibility.  Their love affair is touching, making the outcome all the more effective.

The many strengths of The Fly made it much more than a convincing freak show.  It played not only as an effective allegory for the AIDS epidemic, but also as a much darker version of the Spider-Man origin story.  Whereas Parker becomes a hero, Brundle becomes an abomination known as “Brundlefly.”  It’s a journey of discovery that ends in the bowels of Hell.  It’s truly a shame that 20th Century Fox recently decided to pass on Cronenberg’s proposed remake/sequel.  One cringes at the very idea of what new horrors he had in mind for his audience.
Posted by Unknown at 7:01 PM