An action renaissance is upon us.  At the rate things are going, American martial arts films (or American films with decent fight scenes period) will one day become the sole province of low budget independent filmmakers.  Independent stunt teams and film companies continue to prove unequivocally that big or even average budgets aren’t needed for well-staged action.  When special FX technology becomes refined to the point where the average citizen can render convincing CGI on their home PC, the major studios will surely be in trouble.  Until then, scrappy independent crews will continue turning out product like Urban Fighter. 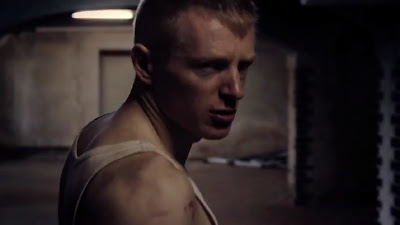 Contrary to what the title might lead one to believe, Urban Fighter is not a long lost Blaxploitation film or hood style martial arts flick.  A young Biker (Mike Möller) earns his freedom by entering a bareknuckle fighting tournament.  He and other recruits train vigorously under the care of a keeper who is ordered to keep them alive under penalty of death. The ex-Biker and his fellow student rebel and are soundly beaten for their trouble.  The ringleader is then returned to prison, where he is sentenced to hard labor.  He then enters another tournament, this one arranged by prison officials taking place behind prison walls.

The trailer for Urban Fighter contains any number of tropes that are right out of the B-Level action movie playbook.  The brawling bikers are like something from Every Which Way but Loose.  The training montages are an essential part of any martial arts or sports film.  The tournament scenario has been a staple of both action movies and video games for decades, ditto for the crooked authorities and prison officials.  These clichés are paraded throughout the trailer for Urban Fighter like a series of familiar faces in a police line-up.  The B-level execution makes them all the more recognizable.

What ultimately stands-out from the very first viewing are the fights and stunts.  Though very obviously choreographed, look and sound real.  Blows and bodies land with the queasy smacks and crunches.  Any speed ramping or under-cranking that might have been used isn’t readily apparent.  Everything seems to move at a fast, though not superhuman, pace.  It all seems to remain somewhat within the realm of believability.     Director/Star Mike Möller and his fellow fighters seem to have limitless agility and energy.  Möller also shows himself to be quite competent with the staging and filming of fights.  When taken all at once, the various feats displayed in this trailer are dizzying.

The acting and dialogue feel a bit raw, but I’ve come to see that as par for the course in these kinds of productions.  People look at movies like Urban Fighter expecting to see one thing and thing only: insane fights.  The title says it all.  That is not to negate the other elements of the production, as the story may in fact be solid.  However, filmmakers like Möller have been known to compensate for such deficiencies with inventiveness and aggression.  Both are evident in the trailer for Urban Fighter.  It may not be a showcase for the finer points of acting and dialogue, but it still appears to have much to offer.