The teaser poster is here for The Amazing Spider-Man is here.  It shows Peter Parker having crawled up the corner of two intersecting walls in what appears to be a really dark alleyway.  He sits perched in a crab walk position, while a light from above shines down on him.  Peter Parker himself is almost completely covered in darkness, but his profile casts a shadow on the walls below him in the shape of the spider emblem that adorns his costume.  Beneath this eye catching image is a rather weird tagline that reads “The Untold Story.” 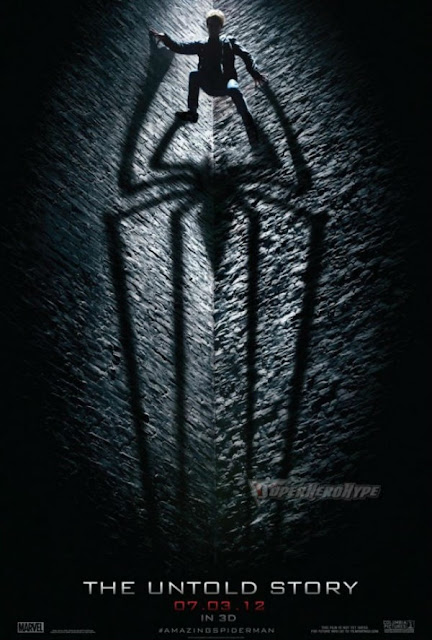 So what does this image convey?  Well, it certainly lets the audience know to get ready for a decidedly darker and more serious take on the material than Sam Riami has ever offered, though that much could be gleaned from the very first photo of a pensive and unmasked Peter Parker in a tattered costume that was released months ago.  This is probably the first piece of advertising for a Spider-Man film that focuses on an emblem rather than Spider-Man himself.  In that sense, it is reminiscent of the ad campaigns for the Batman films, which sometimes focus on the Bat signal by itself.

The hero casting a shadow that reveals his true nature/identity is also a trope that is borrowed from Batman.  I’ve seen it used many times in the comics.  It also calls to mind the teaser poster for Star Wars Episode 1: The Phantom Menace, where a young Anakin Skywalker casts the shadow of Darth Vader.  Further comparison of these two posters makes the tagline for the The Amazing Spider-Man seem even stranger.  “The Untold Story” suggests that we will be learning something about Spider-Man that we hadn’t learned from any of the prior films.  The films trailer stressed nothing more than a reimagining of his origin story.  By comparison, the much maligned Star Wars prequel actually did have an untold story to tell.

The poster is great.  It’s both moody and eye catching, and solidly distinguishes this reboot as featuring the title character in a new light. Whether or not the dark and brooding treatment befits the wall crawler has yet to be seen, but this bit of advertising art is perhaps one of the coolest ever offered for this decade old franchise.  Strangely though, it doesn’t really stoke my interest for the film itself.  Oh well, either way they’ve already got my money.
Posted by Unknown at 11:34 AM