The very concept of a “realistic” superhero film would seem to be a gross contradiction in terms.  The fantastical conventions and tropes of the genre seem irreversibly resistant to such iterations.  This has not stopped a plethora of filmmakers from offering pseudo realistic takes on the caped and costumed set.  Kick Ass, Watchmen, and Christopher Nolan’s Batman films all purport to be the genuine article in terms of grit and realism.  All of the aforementioned address the various implausibilities and impossibilities of the genre in a myriad of ways.  Though these films can in no way be considered artistic failures, none of them ever has ever been completely successful in accomplishing their goals.  Writer/Director Michael Morrissey has attempted to remedy this problem with his gritty vigilante film, Boy Wonder. 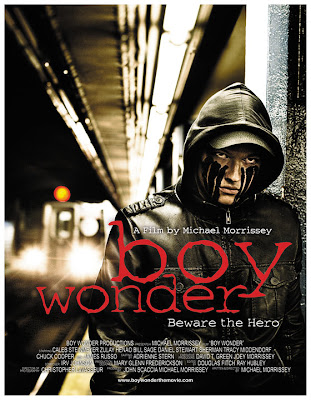 Sean Donovan is a seemingly ineffectual teen leading a seemingly uneventful existence in Brooklyn.  He’s a severely introverted young man who scores straight A’s in all of his classes.  However, his meek and unassuming demeanor disguises a huge propensity for violence.  At night he prowls the streets of Brooklyn, brutally assaulting and sometimes murdering any violent criminal he happens upon.  His one man campaign of vigilante justice is the result of a horrible childhood tragedy. As a young boy, he witnessed the brutal murder of his mother by a carjacker.  He hopes to one day exact vengeance on her killer.  Until that point, his crusade will continue indefinitely.

As one can easily assert by reading the plot synopsis, Boy Wonder Is not film about Batman’s brightly costumed sidekick Robin.  Michael Morrissey, an avowed comics fan, has taken the origin stories and revenge fantasies inherent to the form of comics and allowed them to play out as a brutal urban drama.  The results are at times uneven, but nonetheless intriguing.  The stripped down approach essentially turns the film into an unrelentingly dark character study of a young man who could be considered a blue collar version of Bruce Wayne, sans the “no killing” policy.

There are no huge set pieces or lavish special effects.  The drama is not punctuated by constant or relentless action.  The set pieces are mostly low key, centering on brutal one-on-one confrontations that end fairly quickly.  Though the hero is obviously trained and proficient in combat, the fights unfold in a rather messy and spontaneous manner.  Caleb Steinmeyer’s size and weight are surprisingly taken into account.  Larger, stronger opponents are able to fling him around like a rag doll, yet he is able to turn the tables on them through resourcefulness and use of various weapons.  One wishes that these scenes could have been filmed more clearly, but the muddled aesthetic is in line with the tone that Morrissey is aiming for. The film has some slow moments, but the movie soldiers through on the strength of the performances and character relationships.  Caleb Steinmeyer is the darker version of Peter Parker that Spider Man 3 ineptly tried to bring to life, only here it’s not played for laughs.  Steinmeyer elicits sympathy despite his emotionally distant performance and brutal nature.  As detective Teresa Ames, Zulay Henao exudes both ambition and sex appeal.  Her motherly concern for Sean seems genuine and even suggests a feint hint of sexual attraction to him.  Of course, the characters consummate professionalism would prevent such a thing from ever coming to fruition.   It’s that kind of complexity that keeps the film from feeling as routine and mundane as it might have otherwise played.

Boy Wonder won’t appeal to everyone.  It lacks the obvious and vulgar thrills of traditional action pictures and modern superhero films.  It is not in the same mold as either Spider-Man or Death Wish.  It holds the viewer’s interest through more subtle and cerebral means than either of those films.  Though the execution isn’t flawless, it is nonetheless a thoughtful film with a lot on its mind.  It actually seems interested in what might really happen should a psychologically unbalanced teenager actually decide to take the law into his own hands.  Boy Wonder is worthy viewing for anyone who has ever wanted to see the concept of superheroes taken deadly serious.