After being sprung from a Moscow prison, IMF agent Ethan Hunt (Tom Cruise) and his team infiltrate the Kremlin in order to acquire information on a target known as Cobalt.  The mission ends in unmitigated disaster, and the Kremlin is decimated.  The President of the United States enacts “Ghost Protocol,” effectively turning Hunt and his team into international fugitives.  Unable to operate in an official capacity, the remnants of the IMF must pool their resources and talents to clear their names and avert a nuclear holocaust.  Intelligence Analyst William Brandt (Jeremy Renner) is along for the ride, as he hopes to find redemption at missions end.  Failure is most definitely not an option. 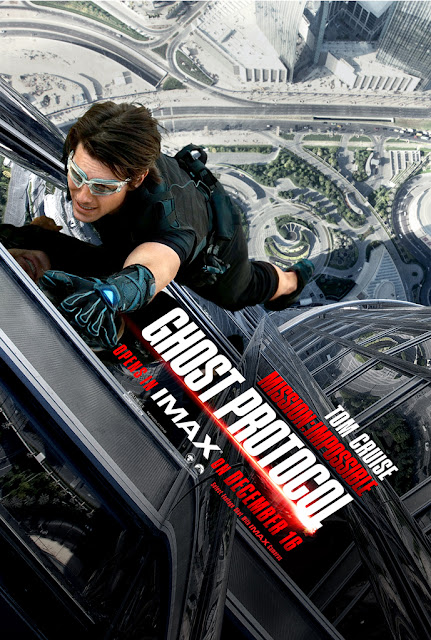 Mission: Impossible – Ghost Protocol is the fourth entry in producer/star Tom Cruise’s 17 year old spy franchise.  Each one has been helmed by a different director, who in turn applies his own sensibility to the material.  This time out, Brad Bird takes his first plunge into live-action filmmaking.  His credentials up until this point include well received animated fare such as The Iron Giant and The Incredibles.  Fortunately, he proves as adept at working with real actors and locations as he is with cell and computer animation.

What is most surprising about Mission: Impossible – Ghost Protocol is that it visually recalls the animated offerings of Brad Bird from a visual standpoint.  The framing and composition of certain scenes is oddly reminiscent of The Incredibles, particularly the shot of Tom Cruise sprinting from the exit of the Burj Khalifa as a massive sandstorm looms overhead.  Tom Cruise’s stiff, slightly comical running posture calls to mind that of Mr. Incredible in the jungle.  That particular brand of déjà vu occurs throughout each and every action sequence.  Though the medium of expression has changed, Brad Bird’s eye has not.

That sensibility transfers over to the staging of the action set-pieces, which are outlandish indeed.  Ethan Hunt would have to have adamantium bones and rubber skin to endure the many falls and scraps he does here.  The film treats such otherworldly endurance casually.  After all, it’s named Mission: Impossible for a reason.  Hunt and his counterparts may as well be superheroes the way they bound from one insane stunt to the other.  The plethora of clever gadgets and inventive scenarios goes a long way in smoothing over the obvious implausibility.  Brad Bird, in accordance with his stunt people and FX technicians, keep the audience too caught up the excitement to focus on the details.  Under his guidance, the films adrenaline never lags.

Some chinks begin to show in the films proverbial armor in the department of story and character.  As before, the plot is impenetrably labyrinthine.  It seems purposely designed to leave the viewer in the dust, making it hard to keep track of the particulars during important moments.  Tom Cruise makes for a sturdy protagonist, though his ability to shrug off emotional and bodily damage of any sort makes him a bit of cartoon.  The incomprehensibility of the plot, coupled with the lack of character depth makes everything seem just a tad superficial.  As a result, the film comes off as simply a visceral tour de force.  Ethan’s the mouse sent charging through the maze while being chased by a ferocious cat.  The details don’t matter, so long as he gets the cheese and makes it out alive.

Brad Bird steers Mission: Impossible – Ghost Protocol as if he were driving a Mack truck.  He aims it like a weapon, barreling over anything in his path.  By the time it’s over, victims and bystanders alike will be wondering just what hit them.  They might also find themselves hoping that Bird turns around for a second pass, as such danger is amazingly exhilarating.  Mission: Impossible – Ghost Protocol has a pronounced hint of desperation that manifests itself visually and sonically.  One wonders how long James Bond or Jason Bourne would last in the imagination of Brad Bird, as he would surely put them through the trials of job.  Mission most definitely accomplished.  The director of the next Mission: Impossible film has his work cut out for him.