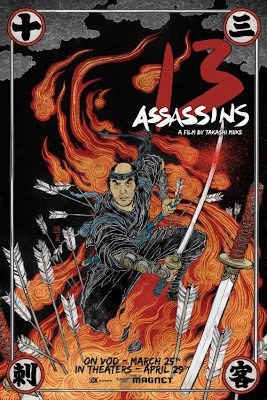 As the age of the samurai gradually fades, Lord Naritsugu (Gorô Inagaki) revels in his own childish cruelty.  He uses his status as the Shogun's younger brother as a license to rape and murder indiscriminately.  After a man who has been personally disgraced by Naritsugu’s antics commits seppuku, it becomes apparent that the young lord’s foolishness can no longer be tolerated, as his further ascendance in the political arena would surely bring about untold suffering.  An elder samurai by the name of Shinzaemon Shimada (Kôji Yakusho) is hired to bring Lord Naritsugu’s reign of terror to an end.
Read more »
Posted by Unknown at 5:37 PM 3 comments: