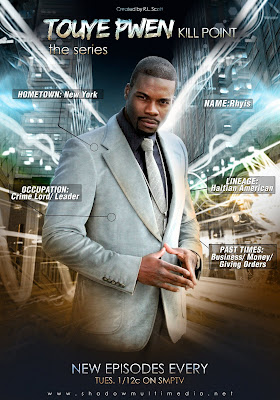 When the God MC speaks, people listen.  You’d think those that cut trailers for movies and television shows would have realized this long ago.  R.L. Scott sure as Hell did, and has commissioned the voice of Rakim Allah to speak on behalf of his upcoming crime series Touye Pwen: Kill Point.  Does he have the great one doing a voice over, or facing the camera and hocking the show like a household cleaning product?  Of course not!  The trailer is a series of words and images flashed onscreen; all cut the pulse pounding pace of Eric B. & Rakim’s classic “Follow the Leader.”  As the sinister bassline bubbles, the short clip builds to a climax.  I thought my anticipation couldn’t be any higher, but I was sorely mistaken.  Though the teaser premiered last night (hence the words “In three days” appearing onscreen) It was so dope that I decided to write it up anyway even though it’s a day late.  It demands to be seen.  So does the series, which premieres this Tuesday at 1pm PST over at www.shadowmultimedia.net.
Read more »
Posted by Unknown at 2:03 PM 1 comment: