Hail Caesar: How a Super Smart Chimp Beat Out a Norse God and a Super Soldier to Become This Summers Ultimate Superhero

It was billed as the main event of the summer, at least for comic book fans.  Marvel Studios had two films in contention for the superhero crown: One about a Norse God who wields a mighty hammer and the other about a super soldier draped in the American flag.  The latter had the clear advantage, if the advance buzz was to be believed.  DC Entertainment, who also had a flagship character in the race, stumbled out of the gate with a clumsy marketing campaign that preceded a mediocre film.  The Norse God was off to a sturdy start and solid finish.  It was the super soldiers race to lose, or so it seemed.  When the dust settled, a chimp was left standing with the first place trophy firmly in hand. 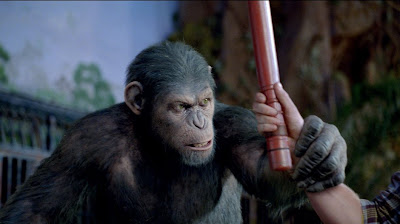