Knight (Shaun Mixon) summons his most prosperous salesman to a private meeting.  However, the mysterious crime lord has much more than business on his mind.  The secret he reveals to his prolific young protégé is nothing short of a revelation.  The question is, how will Khalil (Maurice Whitfield) take the news?

Slithe and his lizard army doggedly pursue the Thundercats to the ends of Third Earth.  Having grown weary of the chase, Lion-O and his team take refuge in a thorn-bush forest.  As they make their way through the terrain, they come in contact with the Petalars, a plant like species that has been trapped in the forest for generations.  A young Petalar by the name of Emerick takes a liking to Lion-O and begins modedling himself after the young warrior.  Flattered, Lion-O promises to deliver the Petalars from the captivity of their thorn bush prison. 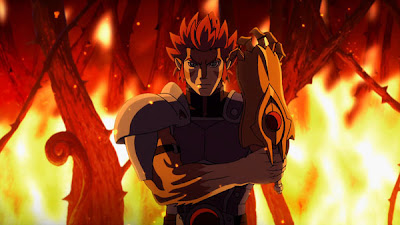