A ruthless warlord named Khalar Zym (Stephen Lang) lays waste to entire Cimmerian village, wiping it from existence.  He seeks the final missing shard of an ancient mask that will aid him in his quest for immortality.  A young boy named Conan (Jason Momoa) emerges from the ruins of the village as its lone survivor.  As the years pass, he grows into a battle hardened and powerfully muscled barbarian.  Through his travels, he has not forsaken his vendetta against Khalar Zym.  When the warlord sets his sights on Tamara (Rachel Nichols), Conan intercepts the young monastery novitiate in hopes of administering final justice for the slaughter of his people and the murder of his father (Ron Perlman). 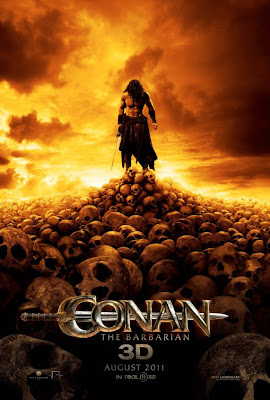