The crack epidemic of the 1980’s proved to be a boon for drug dealers, law makers, and the American media alike.  By the latter half of the decade, it had permeated the American consciousness via endless news coverage and fear mongering.  Strangely, it had yet to receive a crime film that purported to put the phenomenon in perspective.  Scarface had mythologized the “Cocaine Cowboys” era of Miami in way that still resonates today.  The gangster films released by Warner Brothers pictures during the 1930’s paid tribute to the kingpins and vices of that particular era, to the delight of that days movie audiences.  Was crack cocaine not worthy of similar honors?  Again, Warner Brothers pictures sought to properly dramatize the prevailing criminal trends of the era and reap the financial rewards.  On March 8th 1991, American moviegoers were given a guided tour of New Jack City. 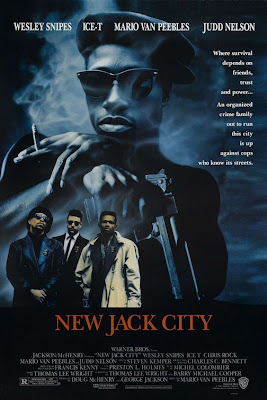