Damien Walters Takes to the Air With a Vengeance in His Latest Showreel. 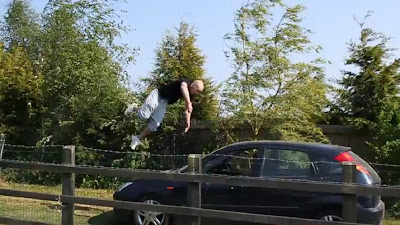 Damien Walters is Hollywood’s last line of defense against the onslaught of digital stunt men.  This British gymnast and parkour expert only very recently got his start in the industry in 2008’s Hellboy II: The Golden Army.  Since then, he has built up a consistent resume of top notch work.  He does anything a digital stunt man can, except he does it for real, without the aid of wires or computerized trickery.  The guy has to be some kind of physical anomaly.  He flips through the air, bounding effortlessly off ledges and walls.  He flips over (and through) moving cars.  He turns regular somersaults into visual poetry.  The guy is simply a real life superhero.  Every year about this time, he releases a showreel that displays his abilities in various settings and obstacles.  The latest one got released just yesterday and it really is something to behold.  This guy is a true artist, using any available structure or landscape as his canvas.  This video has more reply value than your favorite song.  Once you click play, you’ll be hooked.  Enjoy.

Many see Hollywood’s plundering of superhero comics, cartoons, and video games as a sign of creative bankruptcy.  That’s a rather curious outlook given as to how tinsel town has a long and storied tradition of adapting material from other mediums.  Then again, relatively modern mediums such as video games don’t have the prestige that literary properties do.  Neither are they confined to the same laws of physics and traditional storytelling that that live action filmmaking usually is.  Perhaps that is why they provide so much inspiration for Hollywood’s showmen and ringmasters.  Every once in a while such inspiration leads to inventive and novel filmmaking.  Such is the case with the super short film The Mini Boss (Third Person Action Scene).