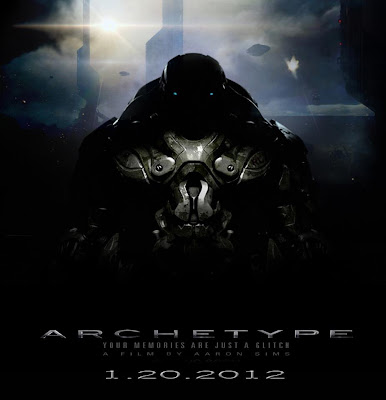 Archetype is the brainchild of Aaron Sims, a concept artist who has worked on recent blockbusters such as Transformers: Dark of the Moon, Rise of the Planet of the Apes, The Incredible Hulk, and the ill-fated Green Lantern.  The seven minute science fiction film is essentially a showreel for his skills and talents, but it also manages to be a compelling iteration of a very familiar theme.

The opening shot of a ship hovering over a Grand Canyon-like vista beneath an overcast sky is like a giant matte painting come to life.  It doesn’t necessarily look “real,” though it still exhibits a dreamy sense of artistry.  The thin brush strokes are evident in the highly detailed rendering of the landscape and skies.  While these images may not have been painted by hand, they exude a hand painted feel.  This immediately makes the world of Archetype feel more akin to films that used practical FX once upon a time.

After the giant ship deploys a platoon of war robots, the camera zooms in on ground level combat taking place in a wooded area.  These scenes take on a District 9 sort of ambience, as the robots fire weapons that seem to nearly disintegrate their human targets.  It’s all shown through the view/perspective of RL7.  It’s impressive how well the obviously CG animated robots blend in with both their human counterparts and real surroundings.  These FX would not feel out of place in a mega-budget sci-fi film.

The scene then shifts to an intense debriefing/interrogation of RL7 by corporate personnel.  Robert Joy sits across the table from RL7, who is shown only in medium shots and tight close-ups.  Again, the craftsmanship and imagery of District 9 come to mind.  RL7 looks startlingly real in close up.  He could just as well be an animatronic.  In a world where often sub-par FX are often praised to the heavens, Archetype’s meticulous craftsmanship is admirable.

It then becomes evident that the interrogation is taking place inside the “mind” of RL7, and Robert Joy has been placed there via a virtual reality headset of some sort.  He is immediately pulled out as the unit becomes belligerent and violent towards him.   Though I am not too swift on the uptake, the dialogue seems to suggest that all of these units have been implanted with the minds/memories of humans, and likewise have to be “wiped.”

The way the film handles its central idea, of a machine suddenly developing a consciousness and “memories,” is reminiscent of Paul Verhoven’s classic sci-fi satire Robocop.  This is particularly true of the moment where RL7 unexpectedly breaks free of captivity.  Robert Joy exudes exactly the kind of slimy creepiness and lack of empathy that corporate military types are required to have in these kinds of stories.  In the short time he’s given, Joy creates a well realized villain.

Though Archetype may have been chiefly been made with computers, it has a decidedly old school texture.  It seems like the FX were achieved via a variety of different techniques, leaving the viewer somewhat unsure of how it was all pulled off.  That is exactly what made the Special effects extravaganzas of yore so wondrous behold.  Even the highest quality CG animation is often just that: animation.  Aaron Sims has married considerable skill to a tried and true sci-fi trope.  Someday, this guy may create an entire film that takes the genre to the next level.  Bravo, sir.