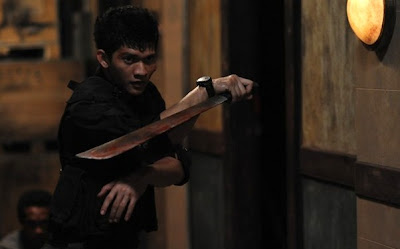 The first clip, titled “Four-On-One” features one of the film’s heroes being chased to a dead end by a bloodthirsty foursome wielding machetes.  The various maneuvers this guy pulls off in order to avoid getting hacked to pieces is mindboggling.  Even more mindboggling is the fact that he does it all in an enclosed space with multiple combatants.  The timing on display is incredible, and the finishing move defies any expectations the viewer may have.  It’s a real show stopper.

The second clip shows the hero working over a group of villains with a combat knife.  He uses it with such dexterity that it almost seems like a mere extension of his hand.  He manages to hit a variety of striking points in shockingly short amount of time.  There are multiple shots where he stabs an attacker in the thigh, than proceeds to cut a swath down to the knee.  It’s excruciating to watch but unbelievably cool. Under-cranking and speed ramping may be involved here, but it’s not at all obvious.  This guy moves like he was hit with a dart of B12.

The third and final clip features some close quarters Gun-Fu and some savage axe wielding action.  Grappling techniques are combined with close-quarters gunplay.  In an instance that mimics (and tops) a key moment from the opening gunfight of John Woo’s action classic Hard Boiled, a bad guy takes multiple rounds to the head at point blank range.  It all unravels at an unnerving pace, but the intensity on display never wavers.


How any film can maintain such a pace for 90 minutes or more is beyond me.  These don’t even appear to be major set pieces.    Those who are virgins to Southeast Asian action cinema will likely be shell shocked.  Gareth Evans has apparently pulled out all the stops and pushed through clean to the other side.  This film may very well set a new bar for action cinema.  In the wake of John Woo and Yuen Woo Ping, I never thought such a thing possible.  As high as my anticipation is, I’m looking for this film to exceed my expectations.
Posted by Unknown at 6:37 PM