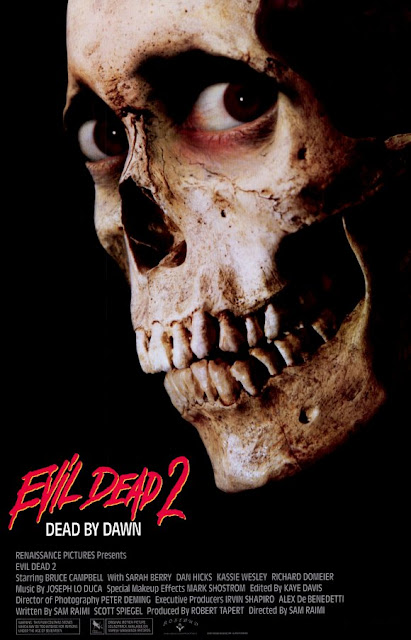 As Evil Dead II: Dead by Dawn begins, young lovers Ash (Bruce Campbell) and Linda (Denise Bixler) crash an abandoned cabin deep in the woods.  Ash stumbles upon and plays a tape which is actually a recording of an archeologist reciting demonic rites and incantations from Necronomicon Ex-Mortis (The Book of the Dead).  Ashes careless actions have unleashed an evil supernatural force deep within the woods.  What started out as a romantic weekend getaway turns into a Hellish ordeal as Ash is forced to do battle with malevolent spirits.  He uses everything at his disposal to fight them off, lest he end up one of their many victims.

Evil Dead II: Dead by Dawn was the first sequel to Sam Raimi’s cult classic The Evil Dead.  The original was a relentlessly resourceful gorefest.  Raimi initially had no plans to revisit his funhouse of terror, hoping to move on to greener cinematic pastures.  He reconsidered his stance after the resounding flop of his comedy Crimewave.  He re-teamed with star Bruce Campbell and co-producer Robert Tapert.  This time out all had considerably more filmmaking experience under their collective belts than they did when making the original, and they employed it to explore many of the same ideas.

At the heart of all the Evil Dead films is Raimi’s wonderfully subversive take on heroism.  Ash, the protagonist, is a parody of the classic Hollywood hero archetype.  Square jawed Bruce Campbell looks like he stepped out of the marquee poster for a 1930’s adventure film.  His classic movie star looks belie a hero who is hopelessly inept in almost every way.  Ash is clueless, bungling, and corny beyond belief.  He’s essentially a straight man, and the film is one long joke at his expense.

Anyone who’s seen any of the first three Spider-Man films can attest to Raimi’s penchant for beating the ever loving shit out of his heroes.  The Spider-Man films use it both for comedy and as an extension of the Christ metaphor present in almost all modern superhero films.  Peter Parker is often a figure of fun, but the audience is ultimately meant to root for him.  By comparison, Ash is always the butt of the joke.  All of the torture he endures is meant to elicit laughter.

Adding to the “funhouse gone wrong” atmosphere of the film is Sam Raimi’s visual sensibility.  It rests somewhere between the old EC horror comics and Chuck Jones.  The camera in a Sam Raimi film is an active participant.  It often takes on the perspective of the “Evil Dead” itself, chasing after Ash and even mocking him.  The visual FX are a smorgasbord of techniques and mediums.  Ghosts and demons are rendered with stop motion, animatronics, scale models, and more.  The film just keeps throwing them at the viewer full speed like a pitching machine.  None of it looks “real,” but it superbly renders the cartoon world that Ash inhabits.

None of the carnage in Evil Dead II: Dead by Dawn was realistic or disturbing enough to warrant the MPAA’s denial of an R-Rating.  They were folding under pressure from parents and media watchdogs.  Even television newsmagazines got in on the act.  In 1987, ABC’s 20/20 even did an “expose” on how the home video explosion made such films readily available to young kids.  It was called “VCR Horrors.”  It was essentially an alarmist piece of propaganda, showcasing a collection of graphic images from a series of extreme horror films.  It also featured interview segments from kids, parents, and specialists.  Evil Dead II features prominently in the segment.  The narrator/announcer even gives a hilariously inept reading of the films plot.


The filmmakers tried in vain to edit the film down to something that would qualify for an R (The original had been released unrated).  The scenes excised have been lost to the winds of time.  They included a number of insane moments.  There was a half headless Evil Ed reeking further havoc, ending with his complete dismemberment at the hands of Ash.  Another showed Linda’s disembodied head spewing bile a la Possessed Regan in The Exorcist, and Bobby Jo’s body being ripped in half after being dragged through the forest by vines.

I doubt that any of those scenes played out as gruesomely as they read on the page.  Even without them, Evil Dead II retained a good portion of its bite.  It’s one of the greatest and goriest comedies ever made.  It announced the maturation of a unique (if quirky) cinematic voice.  The original, while still great in its own right, was just a test run.  This was the birth of Sam Raimi as we know him today.  This is the filmmaker that would eventually bring Spider-Man to glorious life on the big screen.  He also created an original and inspired superhero story with the criminally underrated Darkman.  The world should thank its lucky stars for guys like Sami Raimi and Bruce Campbell.  They keep the rest of us on our collective toes.
Posted by Unknown at 12:05 PM