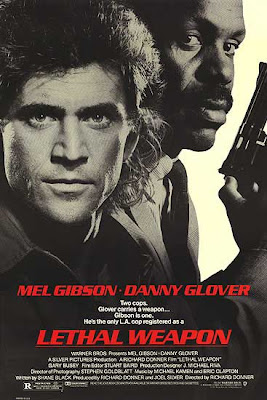 Lethal Weapon focuses on two LAPD Detectives who couldn’t possibly be more different.  Martin Riggs is a burned out Vietnam vet with Special Forces training.  The tragic death of his wife has sent him into a deep depression, to the point where he’s become suicidal.  Detective Sergeant Roger Murtaugh (Danny Glover), also a Vietnam vet, is an upstanding family man.  Having recently celebrated his 50th birthday, he’s plans on coasting smoothly to retirement.  His dreams are seemingly shattered when he’s partnered with the increasingly unstable Riggs.  The two investigate the apparent suicide of a hooker, and in the process uncover something much deeper: a heroin smuggling ring run by a group of Vietnam vets known as Shadow Company.  When this criminal syndicate brings the fight to Murtaugh’s doorstep, Riggs unleashes his inner psycho.

At the time, Lethal Weapon may not have seemed like a sure thing.  Mel Gibson, who’d already endeared himself to fans the world over as Mad Max Rotansky, wasn’t yet the star he would later become.  Danny Glover played Mister Albert Johnson in Steven Spielberg’s adaptation of Alice Walker’s novel The Color Purple. He also did a notable supporting turn in Witness.  Putting the two together might not have seemed like a recipe for movie magic, but that’s exactly what it turned out to be.

Shane Black’s screenplay was many shades darker than the finished product.  It envisioned the troubled Riggs as not just crazy, but as Travis Bickle with a badge.  As played by Gibson, he was definitely a loose cannon.  The masterstroke was in how Gibson managed to find a bit of humanity in this troubled soul.  He didn’t approach him as an action hero, but as something of a tragic figure.  He retained the darkness, but found undercurrents of sadness and humor as well.

Shane Black’s screenplay never specified Murtaugh’s race.  Likewise, the film never makes mention of it.  Murtaugh being a Black man is treated as casually as was possible at the time.  Rather than pushing race boldly to the forefront, the film contrasts differences in age and personality.  Danny Glover looks, acts, and dresses the part of a middle-aged husband and father.  Riggs initially puts him off balance, but Murtaugh ultimately proves a calming influence over his violent partner.  Through Murtaugh, Riggs finds a reason to keep living.

Not to be forgotten is Gary Busey as the fearsome Mr. Joshua, the enforcer of Shadow Company.  In subsequent years, Busey has come to be known as something of a flamboyant Wildman.  In Lethal Weapon, his craziness is more subdued.  He’s stoic and steely eyed.  The character is essentially the evil Martin Riggs, devoid of emotion or remorse.  He keeps his pathos bundled tight behind a poker face and stylish duds.  The trick he pulls with holding a cigarette lighter flame right under his forearm was borrowed from G. Gordon Liddy, who famously burned a hole in his forearm doing it at a party.

The Shadow Company was very obviously inspired by the real life exploits of Army Master Sergeant Leslie “Ike” Atkinson and Frank “Superfly” Lucas.  Atkinson headed up a heroin smuggling operation based in Thailand that smuggled 400 million dollars of “China White” heroin into the U.S.  Lucas was one of Atkinson’s customers, as well as the mastermind behind the famed “Cadaver Connection.”  Though the “Cadaver Connection” was likely a hoax, it provided ample inspiration for Shane Black’s screenplay.

Drama, characterization, and plot aside, Lethal Weapon is an action movie first and foremost.  It uses Riggs adeptness with fists, feet, and guns to stage a number of brief yet delightful set pieces in its first two acts.  Most of the action is delivered with dark humor, courtesy of Shane Black’s snappy dialogue.  Things don’t really get thick until the third act, where Riggs and Murtaugh must rescue Murtaugh’s daughter from the clutches of the Shadow Company.

The rescue mission kicks off a series of events that include torturous interrogations, shoot-outs, car chases, explosions, and the fist fight to end all fist fights.  The end brawl between Riggs and Mr. Joshua is a school yard scrap for the ages.  It plays like a precursor to the MMA.  Ju-Jitsu and Capoeira are heavily employed. Fight choreographer Dennis Newsome famously incorporated elements of “Jailhouse Rock” (known by some as the 52 Hand Blocks) into the mix as well.

Lethal Weapon was a sizeable hit upon release.  It solidified Gibson’s leading man status, and enhanced the rep of producer Joel Silver.  It was the first of a triumvirate of Joel Silver productions (Predator and Die Hard) released in the late eighties that defined the action genre for that time.  The darkness of Shane Black’s original idea was completely filtered out over the course of three sequels but that doesn’t change the magic of the original, which still casts a wonderful spell.  Joel Silver should have stuck to the original script and let Lethal Weapon stand on its own.  It’s perfect as is.