Arnold, Bruce, and Sly Let the Lead Fly in New Image from ‘The Expendables 2’

Some pictures don’t need captions.  If you were born in the late 1970’s and had HBO during the late 1980’s, this image will make your heart sing.  These actors ushered in an era where might made right.  The screen was littered with bursting squibs and muzzle flashes.  The soundtrack roared with automatic gunfire, shattering glass, colliding cars, and explosions.  Every now and then, all of those visual and sonic elements actually accompanied a good movie.  All of the stars in the above picture were at the center of a quality production or two during their prime.  Now all are well past their heyday, but they refuse to leave without a fight.  They are shown here standing side by side and laying down the law in a new image from The Expendables 2. 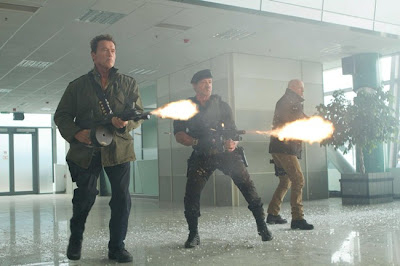 One of the best things about late 80’s action flicks was the hardware.  The films of Schwarzenegger, Stallone, and Willis showed off some truly wondrous weapons.  This image harkens back to that.  It’s worthy of a Joel Silver or Carolco production from that era.  Arnold appears to be holding the same automatic shotgun that Terry Crews had in the first film.  Sly’s gun is harder to make out but is clearly an assault rifle of some sort.  Bruce’s gun is completely covered by the muzzle flash from Sly’s.  Let’s hope that the finished film is packed to the gills with images like this one, and less of the CG assisted, “chaos cinema” aesthetic that hampered the first.  You know this kind of film inside and out, Mr. Stallone.  I’ll consider the first a test run.  This time you gotta bring the A-game.
Posted by Unknown at 11:15 AM