And the hits just keep on coming.  With the release date for The Avengers a little more than two weeks away, the hype machine is going full bore.  One clip after another has been popping up on just about every fansite imaginable.  Remarkably, each one has been more entertaining than the last.  Many have offered brief glimpses of the action (Which I’m still praying does not spoil any of the film’s major set pieces).  The last featured two Avengers fighting side by side.  This new one features two Avengers fighting each other. 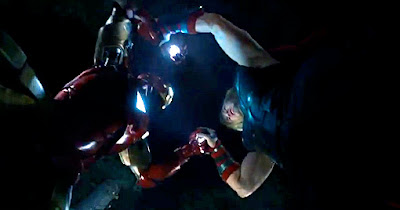 In this clip, Iron Man and Thor duke it out in the woods.  Shockingly, they seem evenly matched.  Even more shocking is that the technology at Shell Head’s disposal seems to give him a slight advantage.  These two don’t hold back on each other, or the surrounding environment for that matter.  As anyone who’s ever picked up a superhero comic knows, wholesale property damage is always par for the course whenever these guys fight.  At this point, it’s obvious that director Joss Whedon understands what an old fashioned superpowered scrap is all about.

Whedon also seems to get that such fights require a number of cool and iconic moments.  The image of smoking Iron Man armor with glowing burn marks is just plain cool, as is the idea of Mjölnir’s lightening blast actually upping the suits power level instead of destroying it.  That’s the kind of show stopping pause that will inspire cheers from the audience.  The more I see of The Avengers, the more this it feels like a little boys daydream.  It’s been a while since one of these movies has made me feel like a kid, which something I’m always game for.