Dre and Snoop Manage to Actually Bring ‘Tupac Back’

Last night at Coachella Fest, Dre and Snoop had a special treat for those in attendance.  Before anyone asks, no, they didn’t finally announce a release date for Detox.  The surprise they had in store was something much more ethereal.  None other than Tupac Amuru Shakur showed up to perform onstage with his former label mates.  Well, it wasn't really Tupac, as the fallen Icon has been dead for some time. Instead, a holographic image of the most revered rapper of all time was projected onstage.  After performing "Hail Mary" for the astonished crowd, it joined Snoop Dogg for a rendition of their duet "2 of Amerikaz Most Wanted." 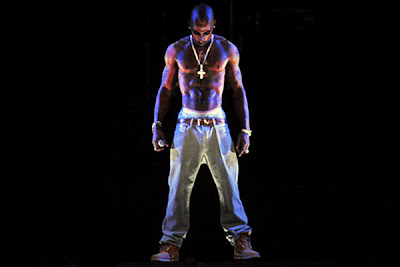 The hologram of a shirtless Tupac donning a crucifix and wearing sagging, creased khakis with beige Timbs greeted the audience with its arms outstretched.   The special effects company Digital Domain, in conjunction with AV Concepts, achieved this grand illusion through a variety of techniques.  They combined actual footage of Pac with computer generated imagery and wire frames.  All of that was filtered through Musion’s Holographic Technology, which projected the image onto a unique reflective surface.  The overall effect is similar to that of “Pepper’s Ghost,” with Pac’s holographic image appearing to be three dimensional instead of merely a projection on a flat screen.

It’s clear that this amazing creation was meant to be seen live, where it could be properly appreciated in all its glory.  Any of the detail work that went into the design is obscured by both the quality of the YouTube video and the lighting at the event. Likewise, the 3D effect is undermined by watching a filmed video of a projected image.  Still, it registers on both a visceral and instinctual level.  The reaction it elicits in the viewer is involuntary.  The emotions override the intellect because the physics on display simply feel right.  Digital Domain and AV Concepts perfectly capture Pac’s mannerisms and physicality.

Stunning though the final product may be, this of course raises a ton of ethical and moral dilemmas.  Could this be considered a bit dishonest on the part of both Dre and Snoop seeing as how Pac wasn’t on good terms with either at the time of his passing?  Is it exploitive to use technology to “resurrect” dead and beloved artist in such a way, especially when there was no way to get his consent?  Is it truly any worse than releasing and remixing Pac’s unfinished works posthumously?  All of these questions are valid, but none of them negate the majesty of this visual.