The Wild Bunch didn’t quite seem like a game changer when it was released in 1969.  The film was met with mixed reviews and mediocre box office.  Despite stumbling out of the proverbial gate, Sam Peckinpah’s western became one of the most influential films of all time.  Surely among its earliest admirers were filmmakers Walter Hill and John Milius.  Hill collaborated with Peckinpah three years later on the Steve McQueen vehicle The Getaway, which became Peckinpah’s biggest hit.  Indeed, Hill’s own approach to filmmaking owed much to that of Peckinpah.  Nearly 20 years after the release of The Wild Bunch, Hill decided to pay proper tribute to his deceased colleague John Milius’s help.  Their efforts yielded the aptly titled Extreme Prejudice. 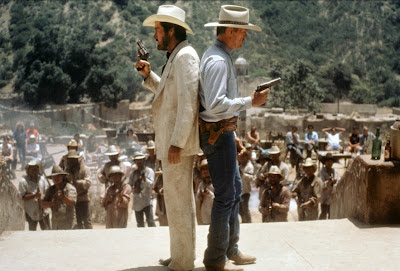 In high school, Jack Benteen (Nick Nolte) and Cash Bailey (Powers Booth) were the best of friends.  In adulthood, they find themselves on opposite sides of the law.  Benteen is now a hardnosed Texas Ranger who does his job to the letter.  Once a police informant, Bailey is now a powerful drug trafficker who lords over his empire from a hacienda in Mexico.  Needless to say, the friendship is now greatly strained.  Things intensify when Cash tries to win back his former lover Sarita (Maria Conchita Alonzo), who is now in a serious relationship with Jack.  As the drama between the three plays out to its logical conclusion, DEA agent Paul Hackett (Michael Ironside) shows up in town with a clandestine U.S. Army unit.  Under Hackett’s command, the unit performs black ops within Benteen’s jurisdiction.  When their activities run afoul of the Ranger, Jack finds himself in the middle of both a deadly love triangle and a covert military operation.  Both situations can only end in bloodshed.

Extreme Prejudice began life in the mid 1970’s as a as a story idea by John Milius and Fred Rexer.  Milius wrote the first draft of the screenplay.  Deric Washburn’s and Harry Kiener’s contributions likely came later on down the line via subsequent drafts.  British screenwriter Lukas Heller also made some contributions went uncredited.  Whether or not director Walter Hill was involved from the outset is unknown, but seeing as how he and Milius seem to be on the same wave length, it’s a strong possibility that he was there from the start.  The work of John Milius has always had a militaristic bend, which was right in place with the 1980’s.  In the wake of Rambo: First Blood Part II, Hollywood action films began to fetishize war heroes.  Meanwhile, Walter Hill’s sensibilities were steeped in different brand of lore: the old west.  Extreme Prejudice neatly consolidates two different American mythologies into a gritty package.

One thing that Hill and Milius share is a healthy distrust of authority.  Extreme Prejudice unfolds under a cloud of post-Vietnam/Watergate paranoia.  Hackett’s unit operates similarly to Pikes Wild Bunch, albeit with paramilitary discipline.  The major difference is that the latter are over-the-hill desperadoes, while the former as supposedly serving a higher purpose.  The Wild Bunch plans to keep the money they steal, while Hackett’s unit is supposedly committing robbery in an attempt to seize Cash Bailey’s drug profits and records of his bank accounts.  In reality, the unit is having the wool pulled over their eyes by Hackett.  They aren’t actually serving their country, but helping to make their commanding officer a very rich man.  Like the troops in Nam, these soldiers are merely cannon fodder.

The Wild Bunch told a tale about the end of the west, and the death of a desperado.  Extreme Prejudice shows a modern America where the violence and values of the old west are alive and well.  The drug trade, like the prohibition era before it, caused a revival of desperado culture in urban and rural America.  Law enforcement agents like Jack Benteen found themselves becoming cannon fodder for the war on drugs.  Ironically, Extreme Prejudice shows both civilians and soldiers to be naive enough to think that war is something that only occurs on foreign soil.  An exchange between two members of Hackett’s unit sums it up nicely: 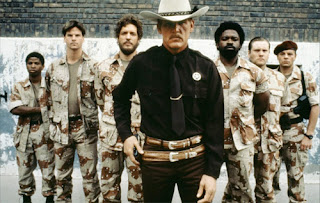 While Hill may have a love for the earlier forms of the western, the variations it went through during the 1960’s clearly had a huge impact on him.  Though Nolte supposedly based his character on real life Texas Ranger Haynie Joaquin Jackson, it’s clear that Nolte is also channeling the ghost of Blonde aka “The Man With No Name” from Sergio Leone’s Dollars trilogy.  Even the film itself, while clearly paying homage to The Wild Bunch, also owes a huge debt to spaghetti westerns.  The characters are covered in layers of sweat and sport five o’clock shadows.  Like The Wild Bunch and Bonnie and Clyde, Extreme Prejudice explodes in an orgy of violence during its closing set piece.  Also like The Wild Bunch, that carnage is rendered with a meticulous eye.  Dark burgundy stage blood explodes and pores from squibs.  Hill doesn’t improve on Peckinpah’s use of slow motion and cutting, but he employs such elements undeniable effect.

Extreme Prejudice was released at the height of action cinema’s golden era, coming out in the same calendar year as Lethal Weapon, Predator, and Robocop.  It’s not in the same class as those other films, which are now considered standard bearers of the action genre.  It’s also not a great or original film by any means.  However, it’s arguably a more elemental and pure example of its genre than any of the others mentioned.  It’s not a hybrid, a buddy flick, or a high concept vehicle.  It doesn’t attempt to reach beyond its target demo.  It draws a connection between a modern film genre with one of its direct ancestors, and binds them together.  A few years ago a remake of The Wild Bunch was announced.  How unnecessary, when Walter Hill did a perfectly respectful one just 25 years ago.

*Check out this trailer, featuring the voice of Don LaFontaine and the Jerry Goldsmith's score from Rambo: First Blood Part II.  It plays like an advertisement for a new line of militaristic action figures.
Posted by Unknown at 2:10 PM