Django Unchained is Quentin Tarantino’s highly anticipated take on spaghetti westerns.  It centers on the exploits of the title character (Jamie Foxx), a freed slave making his way across the American frontier with German dentist and Bounty Hunter Dr. King Schultz (Christopher Waltz) in tow.  The pair face down plantation owner Calvin Candie (Leonardo DiCaprio), who has Django’s wife Broomhilda (Kerry Washington) in his slimy clutches.  A couple of newly released images offer the first real glimpse of the heroes and the villains as they will appear in the finished film. 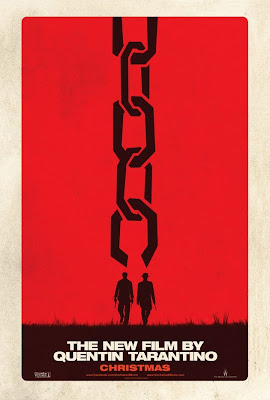 The photos, recently leaked by Entertainment Weekly, look great.  While carrying a saddle on his back, Jamie Foxx seems to be affecting a bit of a pimp strut.  His gun belt sits on his waist as though it were attached to a pair of sagging skinny jeans.  Whether or not these touches were Tarantino’s idea is anyone’s guess.  Foxx has never been much of a “race man,” which probably makes him a better choice for this role than Will Smith ever would have been.  Like Tarantino, Foxx has never been afraid to offend or employ stereotypes.  Christoph Waltz’s wardrobe suggests that he’s playing Watson to Jamie’s Sherlock Holmes.  Last but not least, DiCaprio looks sinisterly cool with his villainous goatee and cigarette holder. 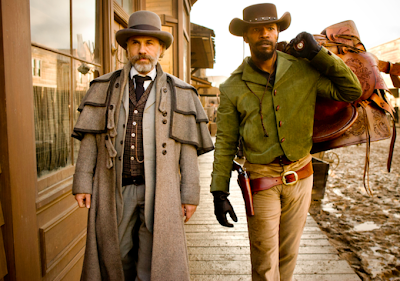 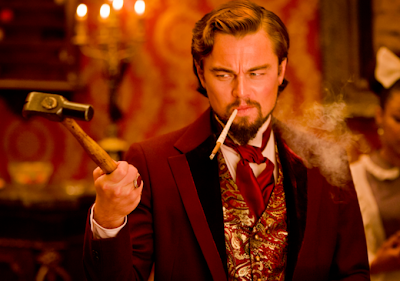 As the film’s Christmas release date approaches, my feelings toward it only grow more conflicted.  I love Tarantino movies. I also love the idea of a plantation owner getting his comeuppance by way of a former slave.  Still, I’m not sure if these two great tastes will actually taste great together.  This movie tackles one of the darkest periods of American history during one of the most racially charged years in recent memory.  That could be seen as daring, but it’s also undeniably exploitative.  That’s probably fitting given how Tarantino is basically an exploitation filmmaker with the sensibilities of an auteur.  Still, the whole thing feels more like a provocateur getting his rocks off than anything else.  Despite my misgivings, I’m sure Django Unchained will be worth the wait.