Movie Review: The Cabin in the Woods

Five college kids head to a cabin located deep in the woods.  Their plans for a hedonistic vacation come to an abrupt halt when strange goings on put a damper on the party.  Unbeknownst to them, the quintet are actually pawns in a much bigger game.  The men behind the curtain struggle to keep their prey both captive and ignorant to their Machiavellian scheme.  As the rats in the maze get closer to the truth, that truth proves to be more ghastly than anything in their wildest nightmares. 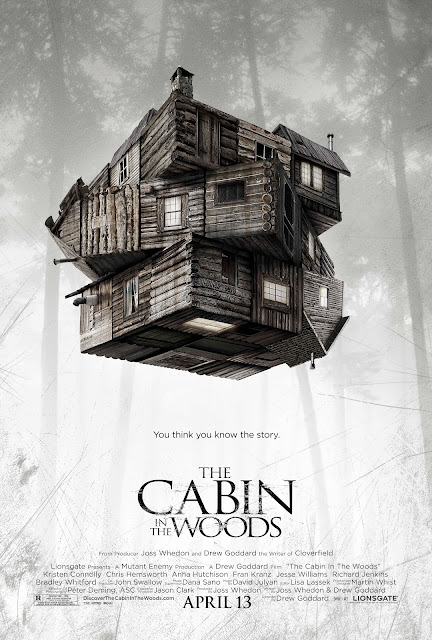 Cabin in the Woods is a horror comedy from the minds of Joss Whedon and Drew Goddard, both of whom were behind such genre favorites as Buffy the Vampire Slayer and Angel.  Here, they lend their talents to one of the most well-worn horror movie scenarios imaginable.  As can be expected, their trek down this often traveled road yields a few worthwhile surprises, though the journey is bit bumpy at the outset.  Thankfully, the destination justifies the stumbling blocks along the way.

The cast consists of a number of likeable actors playing very familiar character types.  Kurt (Chris Hemsworth) is a parody of an alpha-male.  Dana (Kristen Connolly) is the proverbial babe in the woods. Jules (Anna Hutchinson) is the likeable harlot and Marty (Fran Kranz) is the stoner.  As written and played, Marty is symptomatic of a larger problem that plagues the film.  From the outset, it’s obvious that his role is to break the fourth wall whenever necessary.  He goes about his business in the most obvious way possible.  All of his punches are telegraphed well in advance.

As a whole, the group seems a bit too “in on the joke” at points.  That robs some of the early scares of any real menace.  This might be due to the film tipping its hand very early on by allowing extended peaks behind the curtain.  The developments in the underground facility are juxtaposed with that of the Cabin they monitor.  It’s hard for the audience to get truly scared and invested when the film so obviously lets them know that the whole thing is a put on.

Thankfully, the stakes are gradually raised as the real nature of the situation is revealed.  This results in a third act explosion that takes the film straight into fantasy land.  It goes a long way in making up for the lack of believability that plagues the first two acts.  It also allows some of the films more intriguing ideas to come shining through in an amusing way.  It’s a lot of fun.  Unfortunately, like the zombies in the film, “Chaos Cinema” rears its ugly head to wreak havoc on the kills, all of which are obscured in poor lighting and haphazard edits.  The soundtrack is forced to play the role of a Seeing Eye dog for the viewer.

Cabin in the Woods is a “metafilm” on many levels.  While it’s not a movie about film production in the literal sense, it is essentially a movie about a group of characters placing another group of characters in a certain situation and then manipulating the outcome of said situation to produce the desired result.  That’s basically what storytellers and makers of narrative films do.  It is also a metamovie in regards to the audience itself.  It’s about characters watching and reacting to the outcome of an elaborate production as though it were a movie.

The self-aware tendencies of the film sometimes work to its advantage.  Goddard and Whedon are obviously aware of the puritanical undercurrent than has always been a part of the slasher genre.  Young, nubile teenagers are punished by undead monsters for indulging in the vices of sex and drugs.  Cabin in the Woods puts such tropes front and center, making them a part of the plot.

Cabin in the Woods succeeds mostly on the ingenuity of its premise and the “carnival gone awry” atmosphere of its third act.  The twist, once it’s revealed, may leave many wanting their money back.  It leaves the viewer feeling as manipulated as any of the characters onscreen, yet somehow that doesn’t take away from its intrigue.    Perceptive viewers will see it as part of an elaborate joke, even though the punch line doesn’t have the heft that it should.  Cabin in the Woods is about how and why we watch horror films.  Ultimately, the answers it offers are creepier than anything the “puppet masters” can come up with.