America has never met a capitalist it didn’t love, or an underdog it wasn’t willing to cheer on.  Hollywood has been catering to such sentiments for ages, churning out movies that portray criminals as self-made, if extremely violent, men.   Though gangster and crime films don’t put asses in seats like they used to, a decent one will almost always find an audience.  The latest of these blood soaked fables, Lawless, comes courtesy of The Weinstein Company. 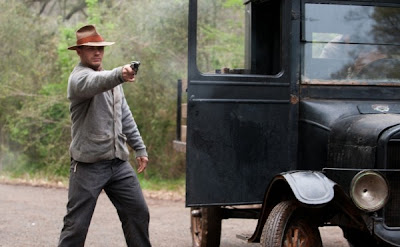 Lawless tells the story of the Bondurant Boys, a trio of brothers who run a very successful bootlegging business during the prohibition era.  When their operation takes Franklin County, Virginia by storm, local gangsters and law enforcement each demand their respective cut. The Bondurant Boys will only compromise but so much, and a big city lawman is eventually brought in to make them toe the line.  This only prompts both sides to dig in their heels deep and prepare for a long fight.

Lawless is based on the 2008 historical novel The Wettest County in the World by Matt Bondurant.  It recounted his own family history, focusing on the exploits of his grandfather and granduncles.  From what I can tell, the story of the Bondurants has all the necessary elements that make such tales resonate with the American public.  It includes ages-old conflicts such as city slickers vs. country boys and “the system” vs. the individual.

This is the kind of film that will fail or succeed largely on the strength of its casting.  Lawless already has one strike against it in that regard, as the increasingly tiresome Shia LaBeouf features prominently in the trailer.  Fortunately, the film also showcases a veritable dream team of British-born Acting talent.  Veteran character actors Guy Pearce and Gary Oldman are on board, as is Tom Hardy.  Hardy seems to be in familiar territory here, adding yet another working class tough guy to his growing cache of characters.  I have no problem paying to see him do the same thing more than once, especially if it’s in the service of a decent story, which Lawless seems to have.