I stare at the Pandora’s Box that is Prometheus, struggling to look away as its lid gradually opens wider and wider with each subsequent trailer.  However, it’s hard to resist temptation when the forbidden fruit looks so sweet.  With the international launch trailer, Ridley Scott continues to tip his hand without throwing the game. 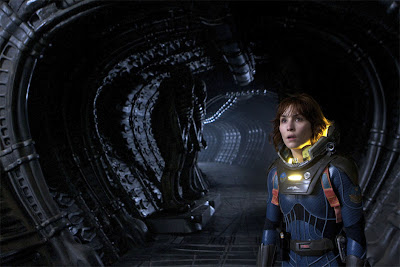 The trailer opens with the Prometheus landing much more smoothly on LV-426 than the Nostromo ever managed to.  The remainder of the first minute is all exposition, spelling out the plot more clearly than any other synopsis up until this point.  One moment shows a first person view from one the team’s helmet cams, the amazing clarity of which feels like a metaphor for the look of the film as well as the film itself.  By comparison, Alien seems to have been filmed through an impenetrable fog.  Prometheus means to remove that fog, literally and figuratively.

Then again, maybe the “fog” of Alien isn’t absent, but has instead taken a different form. This trailer seems to be saying that the dots won’t be so easy to connect this time out.  There are a ton of images that feel like callbacks Alien, yet here they are arranged into an intriguing pastiche.  Not a stitch of context is offered for any of them.  At one point, there’s a hologram image of the Space Jokey running toward the camera.  Moments later, the Jokey stands over Noomi Rapace imposingly.  By the time the title screen comes up, Prometheus is still the most mysterious Blockbuster of the year.  The wait for this has just gone from unbearable to torturous.