The original Total Recall was one of Arnie’s very best.  I cringed at the prospect of a remake.  The first leaked shots of vehicles and storm troopers did little to ease my fears.  Despite my misgivings, I am aware that Total Recall is hardly a sacred work of art.  Its basic concept all but begs to re-imagined in modern terms.  Just a little while ago, the world was given its first look at the new Total Recall.  It is at once completely foreign, but at the same time vaguely familiar. 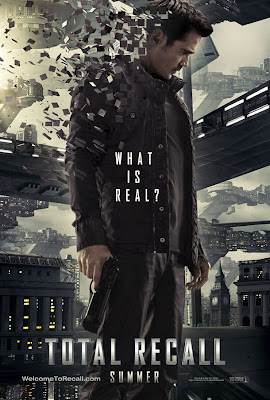 Paul Verhoven made the original Total Recall into an ultraviolent cinematic comic book.  It was a three ring circus with Arnold Schwarzenegger as its centerpiece.  With his otherworldly physique, Arnold lumbered through a futuristic wonderland like Clark Kent with amnesia.  Even as Quaid, one could see the “S” hidden beneath his shirt.  He never once felt like a true “Everyman,” but that was part of the fun.  The one way in which this remake distinguishes itself right off the bat is with the casting of Collin Farrell.    Farrell gives off more of a Matt Damon/Jason Bourne vibe.  He’s lithe and agile.  The contrast cannot be ignored, and is most certainly intentional.

The differences don’t end there.  Total Recall 2012 looks strikingly different from the original. The production design is reminiscent of another Phillip K. Dick adaptation, Minority Report.  The future of the original Total Recall was a bit clunky and gaudy.  It looked like an 80’s version of what the future would be.  The remake has streamlined everything and toned down the colors greatly.  It’s also a more densely populated world, suggesting that Quaid doesn’t live in the lap of luxury.

The trailer contains numerous call backs to the original film.  The design of the Rekall chair hasn’t changed much at all.  A scene showing Collin Farrell dispatching a room full of storm troopers is reminiscent of the scene from the original where Quaid takes out Harry and his former coworkers in a parking garage.  It even ends the same, with Quaid dropping his gun in disgust.  The newer version is actually quite a visual feast.  It plays like an update of “Bullet Time.”  The camera does a 360 around the action, doing rapid zooms and pullbacks at key moments.  The action never once slows or stops.  One shot in particular recalls Trinity’s introduction in The Matrix.  In fact, John Cho looks like he could have been an extra in that film.  The final scene in the trailer seems to show the modern version of Quaid’s fat lady mask.

After seeing this trailer, I feel somewhat humbled.  The original Total Recall will always be a gem and a testament to Arnold’s star power.  That being said, this new version seems to be offering something a bit different.  It’s not an insane amusement park ride hosted featuring a human sideshow attraction.  It’s a sleek spy/espionage thriller about a guy on the run.  I think that can make for a very interesting new take on the material.  After all, trying to beat the Austrian Oak at his own game would be a huge mistake.