Despite all of the trailers, viral videos, and various other marketing materials, the mystery of Prometheus somehow remains intact.  As much as I’ve seen, I don’t feel like I have a real idea of what the movie is about.  Punches are clearly being pulled, but the jabs still have me stumbling around the ring.  The latest blow from the 20th Century Fox marketing flurry comes in the form of a featurette released just yesterday.  The clip is little more than ninety seconds long, consisting mostly of testimonials by the cast and Ridley Scott himself.  It also bears quite a bit of new footage.  Like just about everything that has been revealed of this film, it raises just as many questions as answers. 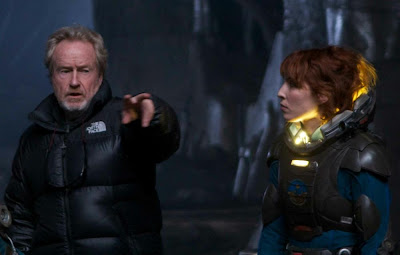 The set design, which incorporates the contributions made by H.R. Giger to the original Alien, looks noticeably sleeker than anything in that film.  Likewise, the tech on display looks way more advanced.  To a degree that can’t be helped as the two films are separated by over thirty years of cinematic evolution.  It’s not that Prometheus doesn’t fit visually with the world established in Alien.  To the contrary, it fits just fine.  But it also looks like it belongs way further down on the timeline, well after the events depicted in Alien.  This is weird seeing as how Prometheus is supposedly a prequel.  Does this have to do with these characters being primarily scientists and explorers instead of blue collar miners?  Only Ridley Scott knows, and he’s only willing to tip his obviously winning hand but so far.