Emma (Rosie Fellner) and Megan (Gillian MacGregor) are two peas in a pod.  They share a flat in London and do almost everything together.  They also happen to be deadly assassins.  The impetuous Emma has been “grounded” by her more forceful partner for mixing business with pleasure, often with disastrous results.  Already seething from having been punished for her transgressions, Emma goes nuclear when she sees Meagan not following her own advice.  Her meltdown culminates in an unsanctioned kill, and the two then have to dispose of the body.  Both women are obviously masters at their craft, but can they stop bickering with each other long enough to take care of business? 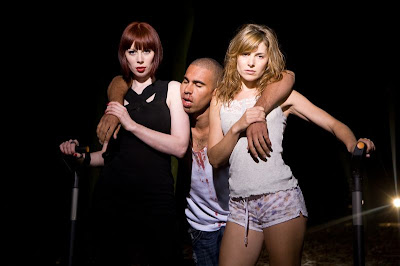 Written by Gillian MacGregor and directed by Adrian Vitoria, Hit Girls pleasantly recalls the Wachowski’s brothers sexually charged debut feature Bound.  It also harkens back to the film that inspired Bound, Alfred Hitchcock’s Rope.  The film also owes a debt to Sam Raimi, Quinton Tarantino, and Michael Ritchie among others.  Like many of the works of the aforementioned filmmakers, Hit Girls plays to the fantasies of adolescent boys, most notably the trope of attractive but undeniably dangerous women.  It manages to be an amusing romp in that particular play house.

The opening moments of the film set the tone nicely, and let the viewer know exactly what to expect.  The image of an antsy Emma howling at the moon while in boy shorts shows that although Hit Girls goes into truly dark territory, none of it should be taken all that seriously.  It also puts the sexual component front and center.  Meagan is an exhibitionist.  During her makeout session with her date, which starts her building’s entrance, there is a brief moment where she stares at the security camera with a knowing smile.  It’s as if she gets off on Emma, and by extension the audience, watching her.  It also suggests that she and Emma have a much more intimate relationship with each other than either could ever have with any man.

One of the most entertaining things about Hit Girls is how literal symbolism and foreshadowing plays out.  At one point, Emma sits on the lap of Meagan’s date while holding a bloodied knitting needle and two balls of yarn in one hand.  The way she holds her knitting tools suggest a bloodied phallus.  Loverboy went up to the apartment with Meagan expecting some action.  Those expectations made him unaware of the obvious tension between these two roommates.  The blood rushing to the little head instead of the big head made him oblivious to the danger afoot.  Such symbolism also calls to mind the puritanical subtext of slasher movies.  Young victims often die because they are engaged in, or preoccupied with, sex.

From the seven minute mark, Hit Girls resembles the stretch of Goodfellas that focused on the disposal of Billy Batts body.  Like Jimmy Conway, Meagan is pissed at her partner’s inability to control her anger.  The scene where Batts heavily decomposed remains are dug up used red lighting.  Hit Girls uses a blinding white.  The aesthetic differences are interesting considering both scenes are played for dark laughs.  It’s also reminiscent of a Steve Buscemi directed episode of The Sopranos entitled “Pine Barrens.”

Emma appears to be the parent, or alpha, of the two.  Her dominance is established very early on during her make out session with her date.  Hit Girls could be seen as an exploration of the parent/child dynamic at work, particularly the old saying “Do as I say, not as I do” and its inherent hypocrisy.  Emma, the “child,” sees that hypocrisy and points it out.  Emma denies/disregards said hypocrisy yet still compels Emma to follow the rules.  At first, their fight plays more like a scrap than an intricate dance.  It soon progresses into more refined forms of pugilism, yet it still manages to pause for a laugh or two throughout.  The western style showdowns in Japanese chambara films are parodied, and the whole bloody affair ends with a moment that is worthy of Evil Dead II: Dead by Dawn.

Hit Girls is both fun and funny.  There’s more to it than meets the eye, but even though subtext exists, it doesn’t beg to be dissected or dwelled on.  Adrian Vitoria and company simply want to entertain, and they accomplish that.  I wouldn’t mind seeing these girls go a few more rounds in further adventures.  I’m sure this isn’t the first little mess they’ve had to clean up, though I wonder how many variations the filmmakers can come up with.