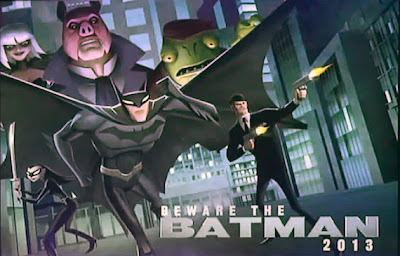 The series will focus on Batman’s ongoing conflicts with a new a gaggle of never before seen villains.  Aside from that, it seems to be in keeping with previous animated iterations of Batman in regards to tone.  In fact, when Batman’s face is finally revealed, it looks a bit like the logo for Batman: the Animated Series brought to three dimensional life.  Like its classic Bruce Timm produced forerunner, the production design of Beware the Batman eschews any sort of realism for fantastical film noir.

Similarities to its immediate predecessors notwithstanding, I wouldn’t doubt that Beware the Batman has something new to offer viewers when it finally hits the airwaves later this year.  Each creative team brings with it new takes on old ideas and stories.  Besides, how boring would it be if different writers and animators weren’t allowed contribute to Batman’s legacy?  Batman: The Animated Series will always be a high watermark for animation.  Nothing will ever be able to tarnish its luster.  Rather, newer cartoons can only add to the ever expanding library of Bat-media, and that’s fine by me.