On the weekend of May 4th, 2012, The Avengers took superhero cinema to new box office heights.  On it became the first film ever to reach the double century mark in its first three days of release.  That number is staggering, but it isn’t the first time a Marvel property made such a grand entrance.  Ten years ago, on the exact same weekend, a certain wall crawler pulled off a similar feat.  He took his sweet time getting to movie screens, but when he finally did, fans responded with a level of enthusiasm rarely seen.  On the weekend of May 3rd, 2002, Spider-Man showed Hollywood just how mighty Marvel’s movie muscles were. 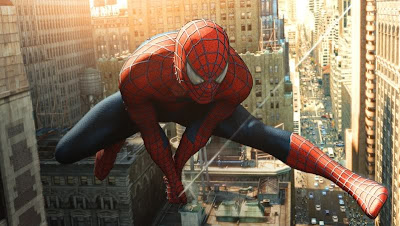 Spider-Man told the story of Peter Parker (Tobey McGuire), an ineffectual and bookish high school student who lives in the Forest Hills section of Queens, NY.  When he isn’t studying, he’s pining away for Mary Jane Watson (Kirsten Dunst), a classmate who barely knows he exists.  His only friend is Harry Osborn (James Franco), son of wealthy Dr. Norman Osborne (William Dafoe), president of Oscorp manufacturing.   One fateful day, while on a class field trip at a genetics lab, Peter is bitten by a genetically altered spider.  The bite blesses him with the proportionate powers of a spider.

Peter decides to cash in on his new found abilities, but the tragic murder of his Uncle Ben Parker changes his plans.  Donning a mask and costume, he takes to fighting crime in the streets as “Spider-Man.”  Meanwhile, Norman Osborne turns himself into a human guinea pig, testing his company’s performance enhancing chemical on himself.  He then goes on a killing spree, taking out all of Oscorp’s top brass after they fire him.  The press dubs him the “Green Goblin.”  Inevitably the Spider and the Goblin cross paths.  Their confrontation teachers Peter the true cost of being a hero.

Getting Spidey to the big screen proved more difficult than any challenge the hero ever faced on the comic-book page.  The project passed through countless hands.  Roger Corman optioned it at one point.  The rights fell to Cannon Films in 1985.  Owners Menaham Golan and Yoram Globus budgeted the picture at a meager 10 million dollars.   Posters and ads even appeared at the 1989 Cannes Film Festival.  The project ultimately fell through, but not before Golan left the ailing Cannon to form 21st Century Film Corporation.  He wanted to finance the film independently, going so far as to presell the television and home video rights.  By the close of the eighties, it seemed that Columbia Pictures would be Spidey’s cinematic home.

Shortly after the initial success of Terminator 2: Judgment Day, writer/director James Cameron expressed interest in the property.  He developed a script treatment that outlined his vision for the film.  He nixed the mechanical webshooters for organic ones, and had Peter losing his virginity to Mary Jane while in costume.  It also featured a “wet dream” sequence where Peter discovers his web-spinning abilities in a sexually analogous manner.

As Carolco Pictures prepared to move forward on the project, things began to fall apart.  Cameron’s contract specified that he be allowed final say as to credits.  The production seemed to being trying to dissociate itself from Golan.  Infuriated, Golan took legal action.  This instituted a flurry of litigation that kept the project in development Hell for the (then) foreseeable future.  Columbia, Carolco, and eventually MGM engaged each other in a pitched legal battle over the movie rights to Spider-Man.  Marvel and Carolco going into bankruptcy certainly didn’t help matters any.

The conflict was finally resolved by the emergence and resolution of another one, equally as complex.  Columbia planned on doing a series of 007 films to rival that of MGM’s.  Frightened at the prospect of their sole bread winner being rendered irrelevant by a rival studios incarnation, MGM agreed to a trade.  They kept James Bond for themselves, and Columbia got the Wall Crawler.  At long last, a Spider-Man film would see the light of day.  This still left a number of issues to be resolved.  Who would write it?  Who would star?  Who would direct?

The reigns were ultimately placed in Sam Raimi’s lap.  By the early 2000’s, Raimi was known to horror fans the world over as the man behind the wonderfully bizarre Evil Dead films.  His style owed much to comics, as well the slapstick shenanigans of The Three Stooges and Warner Brothers Looney Tunes shorts.  Thanks to those inspirations, he developed a sadistic penchant for inflicting endless physical punishment on the protagonists of his films.  He also had an enthusiasm for the character of Spider-Man that dated back to his childhood.    He and the Web –Slinger were a match made in Heaven.

Next up was filling out the cast.  Leonardo DiCaprio and Freddie Prinze Junior were considered for the role of Peter Parker.  Raimi ultimately championed Tobey McGuire after seeing his performance in The Cider House Rules.  Columbia was initially skittish but relented after McGuire’s audition.  John Malkovich was in talks to play Norman Osborne, but William Dafoe eventually won out.  James Franco, who initially tried out for Peter Parker, was cast as Harry.  Interview With A Vampire’s Kirsten Dunst would be Mary Jane.

The look of the film was the next hurdle.  Spider-Man’s costume stayed true to the basic design seen in the comics, but with a few alterations.  It would feature raised webbing and a scaly, rubbery texture.  The Green Goblin’s visage was initially conceived as the result of the chemicals Norman Osborne administered on himself.  Raimi had a team of makeup artists flesh out his ideas, and filmed test footage.  The idea was scrapped in favor of a mask/helmet hybrid and matching body armor.

Raimi’s most controversial decision by far was abandoning the mechanical webshooters just as Cameron’s scriptment had.  He saw them as one fantastical element too many in a film that already asked the audience to suspend its disbelief considerably.  David Keopp’s screenplay retained certain elements of Cameron’s treatment, albeit in an altered form.  Gwen Stacy wouldn’t be included, but familiar elements of her storyline would be in the finale.  The origin story would remain intact, with genetics supplanting radioactivity.  Last but not least, Peter and Mary Jane’s relationship would remain wholesomely chaste.

The resulting film, while its title character’s first cinematic outing, felt very familiar.  It’s very aware of its cinematic lineage, borrowing heavily from both Richard Donner’s Superman and Tim Burton’s Batman.  Like Superman, it was an origin story with epic scope.  Spidey and Green Goblin’s confrontation at the fair echoes Superman’s last minute rescue of Lois Lane as she falls from a rooftop helipad on a skyscraper.  It shares Batman’s fascination with duality.  Like Tim Burton’s caped crusader, Raimi’s Wall crawler is a misunderstood outcast who becomes empowered when donning a costume.  The aforementioned confrontation at the fair also borrows elements from the Batman’s finale.

Spider-Man couples Raimi’s aesthetic with the summer Blockbuster, dulling its edge in the process.  One can feel the filmmaker pulling his punches.  The whole production feels overly cautious, as if the studio is anxious as to how all of this will be received.  Still, Raimi’s id surfaces every now and then.  The cage match with Bonesaw McGraw is one.  The setting, as well as the choice of Randy “Macho Man” Savage (R.I.P) to play McGraw, makes Raimi’s style seem even more cartoonish than usual.  Thankfully, the film has a whimsically light tone to match Raimi’s blunted edge.  Its style doesn’t imply or hint at anything it isn’t prepared to deliver on.

Like Ash in the Evil Dead films, Peter Parker is made to be a figure of fun, though not nearly to the same extent.  The laughs at peters expense mostly come before his full transformation into Spider-Man.  Once that happens, Raimi’s sadism takes on an increasingly serious bend.  He uses it to enhance the messiah-metaphor common to superhero stories.  This comes to a head during the ending fight in an abandoned atrium.  It has a feeling of desperation that the preceding set-pieces lacked.  Peter is beaten bloody by the goblin, even taking a “pumpkin bomb” blast to the face.  Yet, the nerdy hero keeps on coming.  His bloodied and bruised face, sporting a scowl of determination beneath a torn mask, is the most strikingly iconic image in the entire film.  It would be repeated in both sequels.

Though likeable, the film makes some crucial mistakes.  Chief among these are the FX.  Most of Spidey’s physical feats are achieved through CGI.  When dressed in wrestling garn and embarking on his first night out as a hero, Spidey looks like Gumby’s more colorful cousin.  He bounces about on rubbery limbs.  When in full costume, he glides as if wieghtles.  Adding to this sense of artificiality is the Goblin’s costume design, which makes him look like a Power Ranger.

Like The Avengers, Spider-Man defied all expectations.  Its three day gross was record breaking at the time.  It went on to score 400 million dollars domestically, besting both The Lord of The Rings: The Fellowship of the Ring and Harry Potter and the Sorcerer’s Stone at the U.S. box office.  It represented a new phase in superhero cinema, showing that big budget adaptations of iconic characters could still be lucrative if done right.  Its FX haven’t aged well at all, and its flaws stick out now more than ever.  Yet it had such an impact that its shadow still looms quite large in the public consciousness.  That’s why this reboot seems so premature.  The Amazing Spider-Man might indeed be a good movie, but it will never have the impact of Raimi’s seminal superhero opus.