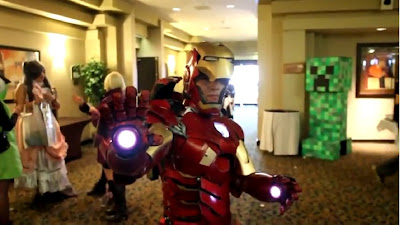 According to Le, the suit took two weeks to make.  It consists of recycled plastic, yet still seems to have a metallic sheen at first glance.  All of the lights work courtesy of LED’s and resistors operating on a surprisingly low wattage.  In the interview clip below, Le is amazingly nonchalant about it all, and why shouldn’t he be?  He’s obviously a very talented guy.  His YouTube page reveals a similarly impressive cosplay of the Kestrel Armor from Mass Effect 2.  If Marvel Films wants to save a bit of money on the FX budget for Iron Man III they should hire this guy.  People like to stereotype fanboys as reclusive manchildren who live in a perpetual fantasy world.  Well, it seems that some of these guys have figured out how to turn fantasy into reality.