In a massive, heavily secured research facility, the S.H.E.I.L.D Agency’s best scientists study the mysterious Tesseract.  Its energy personified, and its true capabilities have to be tapped.  One night, it suddenly becomes active, opening a portal across time and space.  Through that portal steps Loki, the exiled Norse God of mischief.  He arrives with a horrifying agenda: the complete and total subjugation of humanity.  He escapes the research facility with The Tesseract in tow, which plays a pivotal role in his master plan. 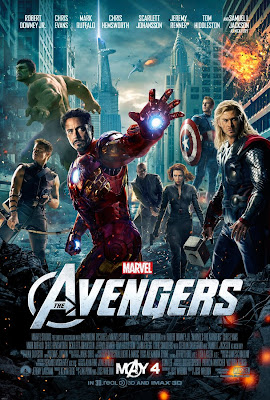 Veteran S.H.I.E.L.D agent Nick Fury immediately springs into action and reactivates The Avengers initiative.  This initiative brings together S.H.I.E.L.D agent Natasha Romanov, super soldier Steve Rogers, billionaire industrialist Tony Stark, and Dr. Bruce Banner.  Their mission: Recover The Tesseract and stop Loki at all costs.  Thor, the God of Thunder, eventually joins their ranks.  The combined powers and abilities of each prove invaluable assets to both S.H.I.E.L.D and the world at large.  Black Widow, Captain America, Iron Man, The Hulk, Thor, and ultimately Hawkeye are perhaps all that stand between Loki and his goal.  But can they put aside their own personal codes and demons long enough to function as team?

It’s finally here.  The grand experiment that Marvel Studios began with 2008’s Iron Man has been leading to this very moment.  The Avengers is the most ambitious film of its kind ever attempted.  It tries to do what the comic has done so effortlessly for nearly 50 years: combine a number disparagingly different characters and mythologies into one cohesive fantasy universe.  To achieve this end, Marvel has enlisted the talents of legendary television scribe Joss Whedon.  Whedon places his unique stamp on the property while retaining that of its parent company.  The result is a colorful yet balanced juggling that only gets bigger as it goes along.

Visually, Whedon rebukes the pseudo-realistic approach favored by so many other films of this kind.  This is a comic book world populated with heroes that wear brightly colored costumes as if they were casual attire.  Yet the production design is not bathed solely primary colors.  It actually reflects the controlled schizophrenia of the film.  Various levels of darkness are contrasted with equally varying levels of light.  Iron Man shines like an armored angel, while Hawkeye hides and broods in dark corners like Batman.  Seamus McGarvey’s cinematography nestles nowhere in the middle of statically epic and modernly frenetic.  It’s indistinct, but also flexible.

The dialogue also reflects the wondrous variety onscreen.  Josh Whedon and Zak Penn’s script changes speed and tone to suit the characters and situations.  The exchanges between Thor and Loki have an almost Shakespearian grandeur that somehow never seems silly or misplaced.  It’s also not so overly serious as to bog things down in mannered posturing.  Jokes and quips intrude on serious moments with no warning at all, catching the viewer totally off guard.  All of this should be gloriously messy, but somehow it isn’t.  The screenplay finds a steady rhythm somewhere near the end of the first act, and maintains it throughout.

The Avengers is organized into two distinct halves.  The first is all set up, while the second is nonstop action.  There is a massive, multi-part set piece that takes place on the S.H.E.I.L.D helicarrier.  The heroes fight off intruders while squabbling amongst each other.  The sequence allows the viewer no rest, jumping from one situation to the next.  The coup de grace is an extended ground battle in Manhattan, where Loki dispatches hordes of Chitauri warriors to raze the city.  If Michael Bay had an ounce filmmaking discipline, Transformers 3 might have looked something like this.  By the time it’s all over, each character has been allowed multiple show-stopping moments.  No one is short changed.

That sense of equity extends to the dramatic and comedic moments as well.  Like the characters they portray, each actor brings his talents to the table.  They all maintain fidelity with their performances in past Marvel films.  All of these characters are fully fleshed out, and have a field day in this new setting.  Chris Hemsworth looks like a professional wrestler but speaks like Othello.  Mark Ruffalo plays Banner as neurotic and repressed.  This makes for a much more sympathetic and eccentric character than has been offered before.  As Hawkeye, Jeremy Renner is all intensity and focus.  There’s not a false note among this cast, and it’s a joy to behold.

The Avengers is like the Star Trek of superhero films.  It places a cast of characters in the midst of outlandish situations and insurmountable odds, and makes their personality differences a major part of the show.  A new bar has been set for superhero films that focus on a team as opposed to a solo character.  No longer is it enough to have one character front and center while the others play the background.  Joss Whedon understands that in order for a film of this sort to work, everyone should have their time in the spotlight.  After all, there is no “I” in team, and there’s not a dull moment in The Avengers.