It’s one of the most familiar stories around.  A group of law men band together (or are put together) for the purposes of cleaning up a bad town.  In order to deal with a wily and ruthless opponent, they adopt methods that fall outside the rules of their given profession.  So goes the prevailing theme in almost every “clean-up-the-town” flick ever made.  American citizens are always taught to play by the rules.  Yet, there is an undying belief that those who do so will almost always lose.  Hence the latest western in a gangster movie setting: Gangster Squad. 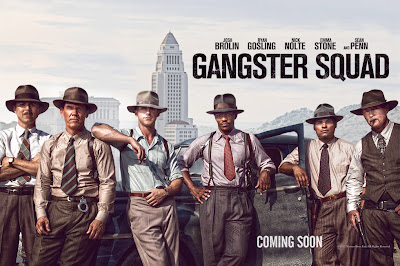 Mickey Cohen (Sean Penn) is an organized criminal from the east coast who moves his operation out west.  While California is virgin territory for his kind, it is no stranger to violence.  To Halt Cohen’s rise to power, the L.A.P.D commissions a small group of cops to take him down.  Bill Parker (Nick Nolte), Sgt. Jerry Wooters (Ryan Gosling), John O’Mara (Josh Brolin), and Rocky Washington (Anthony Mackie) are ready to match Cohen bullet for bullet and blood for blood until one man is left standing.

There’s a reason why certain things become clichés: They’ve worked time and again in the past.  Still, even the most time tested stories need to be presented effectively to appeal to modern audiences.  To this end, Gangster Squad boasts an all-star cast.  It’s also based on a true story, but anyone familiar with such things knows that means very little. The Untouchables played fast and loose with history, and likely so will Gangster Squad.

This is very familiar territory, but it will no doubt quicken the pulse of true aficianodos.  The high-contrast, darkly lit shots owe more to film noir than to what L.A. probably really looked like in the 1940’s.  Slow motion photography abounds as Tommy guns rattle off rounds and muzzle flashes flare.  Sean Penn seems to be channeling DeNiro.  Ryan Gosling’s weirdo delivery betrays a man used to violence.  Robert Patrick looks like a confederate soldier with his unruly mustache.  The trailer hits all the right beats.

Some stories will be around forever, regardless of who claims to be weary of them.  As long as such tales can be pulled off with style, there shouldn’t be a problem.  There will always be bad men making money from vice, and equally bad men trying to take them down.  America will always look on such periods of history with nostalgia, no matter how awful they truly were.