William Friedkin is nothing if not daring.  That quality has proven to be a gift and a curse.  His inability to reign himself has proven quite costly to him commercially.  Still, it’s unwise to write off an immense talent, even one who appears to be well past his prime.  Unhindered by the commercial expectations of the mainstream, a man like Friedkin is free to explore undiscovered country.  This year, he delves headfirst into the seedier side of Middle America with Killer Joe. 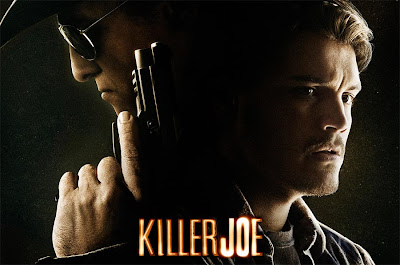 Chris (Emile Hirsch) is a low level drug dealer.  After his mother steals his stash, he finds himself in hot water with his suppliers.  He must come up with six grand or pay with is life.  Fortunately, an unpleasant but viable option presents itself.  His mom has a life insurance policy worth 50 grand.  Of course, she has to die in order for Chris to collect on it.  Desperate, he turns to a man who specializes in that kind of work.  The mythical “Killer Joe” (Matthew McConaughey) is a detective who supplements his income as a hit-man.  Since Chris is unable to pay him up front, Joe proposes a different arrangement. He will be allowed to have his way with Chris’s sister Dottie (Juno Temple) until the debt is paid.

Taboo subject matter has never been off limits for Friedkin.  He once depicted the absolute spiritual violation of a little girl by a vile demon, as well as the struggles of cop going deep cover in New York’s gay underground.   Killer Joe is very much in that same tradition.  Its main character is not only matricidal, but is willing to pimp out his sister to pay off a debt to a killer.  The MPAA gave it an NC-17 for "graphic aberrant content involving violence and sexuality, and a scene of brutality."  That’s quite a ringing endorsement if I do say so myself.

Cast as the title character, Matthew McConaughey, seems to be channeling Woody Harrelson, or even Robert Mitchum circa Cape Fear and Night of the Hunter.  This material begs for such a characterization.  It also begs for a director like Friedkin.  This old man has something to prove to the self-proclaimed “edgy” filmmakers of today.  It’ll be worth it to see just how far he goes this time out.  One should be ready to expect anything from a man who would show a little girl violently masturbating with a crucifix. How that ever passed muster with the MPAA is a mystery for the ages.