Anarchy seems to be on everyone’s minds lately, and for good reason.  The economy is still in shambles.  Not too long ago, the Occupy Wall Street movement had the one percent fearing that their day of reckoning might be soon be at hand.  Americans of all races watch the George Zimmerman murder trial unfold, fearing the violent repercussions a “not guilty” verdict could bring.  Artists have caught wind of the popular zeitgeist and allowed it to inform their work.   Well, some artists have.  Mainstream rappers are too busy living their dreams to care.  It’s surprising then, that Jay-Z and Kanye West have allowed “No Church in the Wild” to become the soundtrack of the coming rebellion.  At least that’s how the video makes it seem. 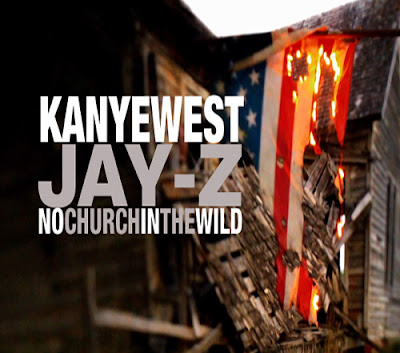 As the clip begins, the masked leader of large mob throws a Molotov cocktail at policemen garbed in full riot gear.  Tribal drums play during the intro, readying the viewer for the carnage to come.  Those same tribal drums play throughout the entire song, making the visuals seem all the more primal.  The slow motion photography gives them a chance to soak in to the viewer’s psyche and be fully processed.  Marble statues look on as mankind destroys itself.  At one point, they seem to look away and cover their faces in horror.  Sometimes, they even seem to mimic the actions they see on the battlefield.  As the day turns to night, they take on a demonic presence, seeming to have given in to darkness.  As cops brutalize civilians, Frank Ocean’s chorus takes on a nihilistic meaning:

Director Romain Gavras makes heavy use of smoke machines and speed ramping.  The video goes into rave mode toward the end, with green lasers reflecting off riot helmet face shields. As kinetic and chaotic as the images are, it all feels very controlled.  I’m still not sure what, if anything, these images have to do with Jay and Kanye’s lyrics.  They definitely suit the title of the song, but the actual content of the album and the public image of its authors make it impossible to take such sentiments seriously.  Still, this clip holds my attention from the first moment to the last, and makes me dream of the coming apocalypse.  It’s a beautiful nightmare with a pulsing soundtrack.