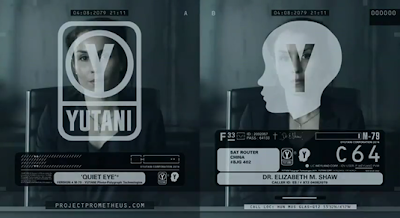 In “Quiet Eye”, Peter Weyland receives an incoming video transmission from archeologist Elizabeth Shaw (played by Noomi Rapace), who has a world changing proposition for him.  It’s done in split screen fashion.  The screen on the left puts Dr. Shaw through a battery of tests, including a polygraph.  It even checks her dental records, as well as her name and likeness, against a number of possible matches.  The conversation itself isn’t really that interesting.  It’s meant to establish Dr. Shaw’s determination, but such character development would be better left for the film itself.  Still, it makes me wonder just what Phone calls will be like in the future.  The only things missing are blood samples and X-Rays.