Rider on the Storm: ‘The Road Warrior’ Celebrates its 30th Anniversary

Though the Western fell out of favor with audiences decades ago, the action genre has been faithfully carrying on its traditions ever since.  However, some action films aren’t satisfied with placing the archetypes and tropes of their forebears in a more modern setting.  Some filmmakers have gone so far as to create dystopian futures where the stories and images of the old west can thrive.  These imaginary landscapes functioned in much the same way as the western frontier of popular American myth.  The most famous and influential of these was writer/director George Miller’s Mad Max trilogy, the second entry of which proved to be revolutionary.  So effective was its presentation, that it arguably spawned its own sci-fi subgenre. 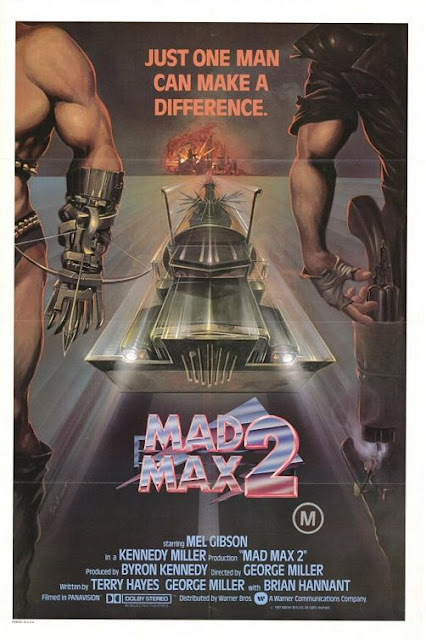 The Road Warrior aka Mad Max 2 begins amidst desolation and despair.  The world has been reduced to ruins via global war.  Anarchy rules as roving tribes scavenge barren landscapes for food and petrol.  Former Australian Highway Patrolman “Mad” Max Rockatansky (Mel Gibson) cruises the roadways in a Supercharged V-8 pursuit special with his pet cattle dog.  He is captured by a Gyro Captain after trying to pilfer fuel from his flying machine.  The resourceful Max turns the tables on his captor, prompting him to offer up vital information in exchange for his life.

The Captain tells Max of a tiny settlement built around a working oil refinery.  Upon investigation, Max finds out that the settlement is under constant attack by the fearsome Lord Humungus and his minions.  The Humungus issues an ultimatum to his prey: Vacate the premises immediately, or be slaughtered.  The reluctant Max becomes embroiled in the conflict, as he may be the only thing standing between the settlers and total annihilation.  Can he offer them and their precious fuel safe passage through such savage lands?

The original Mad Max was a sizeable cult hit in the states.  Writer/Director George Miller decided that the follow up should be considerably more than a rehash.  Whereas the first film was simply a violent revenge tale, The Road Warrior would be something far more ambitious.  This required a few tweaks to the main character, as well as an upgrade of the action set-pieces.  Miller, Gibson, and the film’s stunt coordinators were more than game.

In his first outing, Max was a lawman, husband, and father.  The Road Warrior presents him as a scruffy loner, liberated from the constraints of man-made laws and familial ties.  However, it still requires him to be a father figure of sorts, albeit against his will.  In the original, he failed to protect his own family.  Now, he initially refuses the invitation extended to him by a much larger surrogate family.  His apprehension is understandable; as such baggage can prove costly in his world.

The Road Warrior represented the evolution of George Miller as an artist.  Mad Max looked and functioned like a spaghetti Western.  The Road Warrior owes more to the painterly compositions of John Ford and classic westerns like Shane.   The “Feral Kid” is a stand in for Joey Starrett.  He sees Max as larger than life, just as the audience is intended to.  Wez, chief henchmen of The Humungus, is essentially a punk rock version of Jack Wilson.

The centerpiece of the film is an extended chase scene that is still one of the most unique of its kind.  It’s a model of organization and coordination.  Director George Miller famously compared it to the one in the Buster Keaton classic “The General.”  While such comparisons are certainly apt, Miller employs the conceit to illicit a wholly different response from the viewer.  In an era where CGI models continuously undermine ones suspension of disbelief, The Road Warrior plays as if it was made in another dimension.  To call the stuntwork dynamic would be a gross understatement.

The film’s production design looks suitably makeshift, which is consistent with the idea of a post-apocalyptic wasteland.  The costumes are cobbled together from various times and cultures, yet they still represent the values of their respective “tribes.”  Humungus’s marauders wear mostly black, obviously signifying them as the villains of the piece.  They also sport Mohawks, making them resemble racist caricatures of Indian braves.  That little touch clearly identifies them as the “other” that Max must defend the settlers against, as Eric Lichtenfeld pointed out in his book Action Speaks Louder.

The look of Lord Humungus has influenced numerous screen villains since.  Its iconic use of a hockey mask predates that of Jason Vorhees in the Friday the 13th films.  Humungus also seems to have influenced how Bane is envisioned in The Dark Knight Rises.  There are numerous examples in other mediums as well, such as the character of Lord Jagi from the various manga and anime incarnations of Fist of the North Star.

In the midst of this post-apocalyptic maelstrom is a charismatic performance by Mel Gibson.  He exudes the strong, silent toughness of movie stars past.  His intense glare betrays just a hint of the craziness he would fully unleash in Lethal Weapon and Braveheart.  Like Harrison Ford and Sly Stallone, Gibson’s oeuvre would swell to include multiple Iconic characters.  Still, neither Martin Riggs nor William Wallace looms quite as large as “Mad” Max Rockatansky.  Miller would trot the character out for a third time in 1985’s Mad Max Beyond Thunderdome.

Tom Hardy will take over the role in the upcoming fourth Mad Max film, which is still in preproduction. Whether he will make a suitable Mad Max is anyone’s guess.  Even if he does, he’ll never be able to erase the memory of a scruffy Mel Gibson clad in black leather and walking with a limp.  It’s also unlikely George Miller will ever be able to outdo The Road Warrior. The film stands as both an action adventure masterpiece and loving tribute to one of America’s most beloved and unique genres: the Western.
Posted by Unknown at 12:21 PM