No gangster film would be complete without an ample amount of macho bravado.  Stare downs and threats are every bit as important as actual bloodletting.  One precedes the other.  A well worded ultimatum can properly foreshadow a pivotal event, thus keeping the audience both expectant and on edge.  It’s like the press conference before the title bout.  The challengers have to ramp up the tension and sell the event.  That way, they get the audience blood pumping long before the actual fireworks ever start.  It’s all about facilitating the necessary catharsis.  A new clip from Lawless shows the film to have the necessary tools to do so. 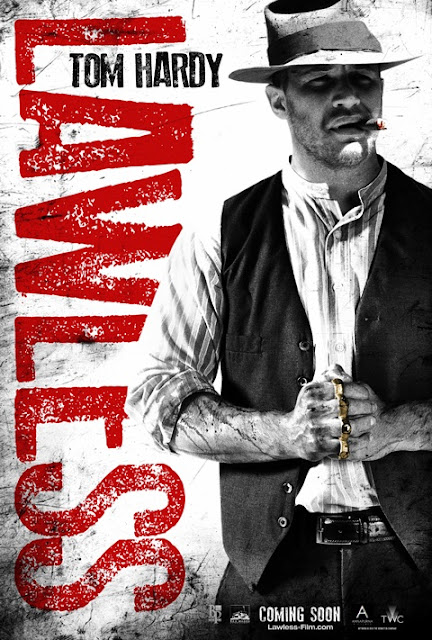 This scene from Lawless focuses on the uneasy introduction between Forrest Bodurant (Tom Hardy) and Deputy Charles Rakes (Guy Pearce).  It’s essentially the arrogant city boy vs. the rough and tumble country boy.  What really matters here is casting and execution.  The tension between these two has to be both believable and palpable.  Hardy is one of those actors that can’t help but to look intense even when delivering the most mundane dialogue.  It’s quite obvious that the audience is meant to side with him, as Rakes is far too smarmy and imposing for his own good.  The only thing keeping Forrest from shooting him dead at that very moment is his badge.  In the end, even that might not be enough.  Place your bets now, folks!