With all the posters, images, and banners comin down the pike lately, one would think the fictional character was running for president this November.  Warner Brothers is clearly working overtime to remind audiences just who rules the night, or in this case the summer Blockbuster season of 2012.  Two more banners have emerged, and both are just as good as the four released yesterday.

The first shows the Caped Crusader enraptured in his flowing cape (Which also happens to be on fire) with the Gotham cityscape in the background.  The other is a tight shot of Bane and Batman facing off against each other “main event” style.  Again, I am reminded of the parallels to the Rocky III.  Bats will lose the first bout horribly, only to emerge triumphant in the rematch.  To offer a bit of context for my crackpot comparison, I have included a familiar image from Rocky III just below the second Banner.  I could be wrong, but I seriously doubt it. 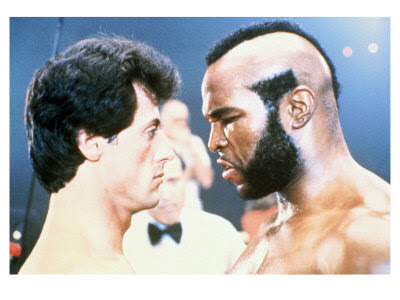