On Tuesday, RZA began rationing out marketing materials for The Man With the Iron Fists via his twitter account.  First came an “official” still image, followed a day later by the poster.  Now comes the coup de grace: the red band trailer, which premiered on IGN last night. 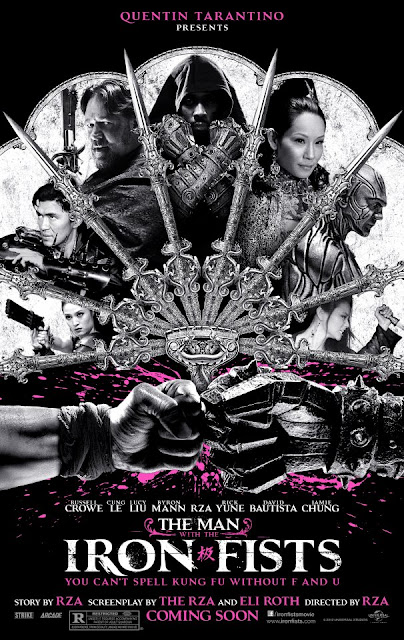 The trailer comes complete with an official plot synopsis:

"Quentin Tarantino presents The Man With the Iron Fists, an action-adventure inspired by kung-fu classics as interpreted by his longtime collaborators RZA and Eli Roth.  Making his debut as a big-screen director and leading man, RZA—alongside a stellar international cast led by Russell Crowe and Lucy Liu—tells the epic story of warriors, assassins and a lone outsider hero in nineteenth-century China who must unite to destroy the clan traitor who would destroy them all.

Since his arrival in China’s Jungle Village, the town’s blacksmith (RZA) has been forced by radical tribal factions to create elaborate tools of destruction.  When the clans’ brewing war boils over, the stranger channels an ancient energy to transform himself into a human weapon.  As he fights alongside iconic heroes and against soulless villains, one man must harness this power to become savior of his adopted people.

Blending astonishing martial-arts sequences from some of the masters of this world with the signature vision he brings as the leader of the Wu-Tang Clan and as one of hip-hop’s most dominant figures of the past two decades, RZA embarks upon his most ambitious, stylized and thrilling project to date."

It also comes along with three new letter boxed stills: 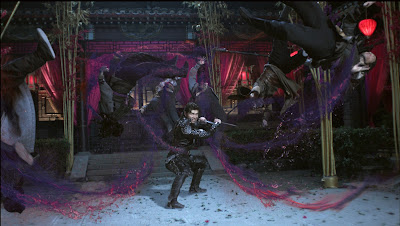 As for the trailer itself, the influence of the old Shaw Brothers classics looms large over every single frame.  All the necessary tropes seem to be in place, from the outlandish weaponry to the unbelievable wigs.  At first glance, this could easily be mistaken as an update of The Bastard Swordsman.

The tongue-in-cheek tone comes as both a relief and a pleasant surprise.  It would’ve been a mistake for RZA and company to play this material completely straight, as the uninitiated might not be ready for it.  The campy tone might also soften the impact of RZA’s raw screen persona and limited acting chops.  The fact that he made no attempt to shed his New York accent is pretty amusing.

The only thing that gives me even the slightest pause is the overabundance of very obvious CGI.  I’m aware that these kinds of gore FX would be hard to pull off practically.  Still, the traditional way would’ve been more in the line with the Shaw Brothers approach, especially the films of Chang Cheh.  Phony looking stage blood beats phony looking digital blood any old day of the week if you ask me.  Minor nitpicks aside, this looks like a lot of fun.