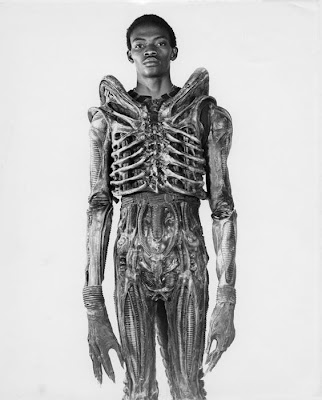 Bolaji scored the film's title role after a chance meeting with casting agent Peter Archer in a pub on London’s West End.  The rest, as they say, is history.  Badejo’s immediate future included tai chi and mime classes.  It also included spending hours in a monster suit whose head and tail made it impossible for him to sit down between takes.  A special rig had to be built for such purposes.  On top of everything else, the suit had to be slathered with KY jelly periodically in order to maintain its slimy look.  Those indignities aside, the final results were undeniable.

A bit of test footage was recently unearthed by the website io9.  It’s easily as creepy and disturbing as anything that made it into the finished film.  It shows Badejo in nothing but his underwear and a mockup of the Xenomorph’s head.  He slowly creeps toward the camera, practicing the creature’s movements.  This footage firmly places Badejo in the same company as Kevin Peter Hall and Clay Fontenot.  All three are Black men who played key roles in bringing seminal genre properties to life.

At the same time, the casting of Badejo as the Alien is perhaps a bit too on the nose.  The entire film is essentially a rape metaphor, and the xenomorph a giant Black penis that stalks and violates the Nostromo’s crew one by one.  The racial elements of the film’s subtext notwithstanding, Badejo’s contribution should always be remembered as an integral part of Alien’s legacy.  The test footage is located below.