Is The Black Panther Getting His Own Movie?

During my interview Michael Jai White, he toyed with the idea of playing The Black Panther.  It’s a tantalizing prospect, to be sure.  Mike definitely has the attitude and the physicality to pull it off.  He’s also a pretty capable actor to boot.  However, the likelihood of a Black Panther movie actually getting made is very low.  Equally low is the probability that such a film would actually be done right.  Well, it seems that Marvel Studios means to prove such notions wrong.   T’Challa might be making his cinematic debut as early as 2012. 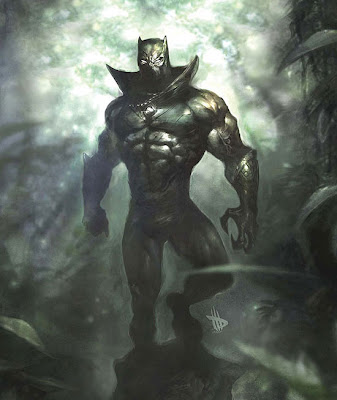 El Mayimbe over at LatinoReview (A fairly dependable source as far as these things go), claims that MarvelStudios is preparing a Black Pantherfilm for release in 2014.  Though Marvel has denied this, Mayimbe seems insistent that it’s going to happen.  He also says that the script is “fantastic.”  I pray that he is right.  This is the kind of film that Black geeks the world over have been dreaming about for decades.  It could finally disprove the notion that mass audiences won’t accept a Black hero in a tentpole picture.  Hopefully, Marvel will do the right thing and make this movie happen.
Posted by Unknown at 7:03 PM