To say that the trailer for Django Unchained starts off boldly is an understatement.  It begins with a procession of African slaves being led through the desert in chains.  After nightfall, their armed captor leads them through the woods by gaslight.  They happen upon the seemingly harmless Dr. King Schultz (Christophe Waltz).  Just after Django (Jamie Foxx) himself is introduced as one of the slaves, Dr. King Schultz is revealed to be his liberator.  As James Brown’s “The Big Payback” kicks in on the soundtrack, a newly unshackled Django throws off his shroud as though he were the Godfather of soul himself.  Thus begins the world’s first real look at Django Unchained. 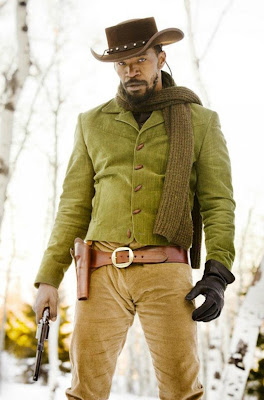 Right from the very beginning, Tarantino loudly announces his presence.  He also makes it clear that he plans to pull no punches this time out, either in terms of style or substance.  Those who were expecting anything else were indeed fooling themselves.  As a filmmaker, he’s never practiced subtlety or anonymity.  What sounds like a newly mixed version of “The Big Payback” continues to play throughout.  Traditional western style iconography is juxtaposed with vintage 70’s style filmmaking excess.  Django’s wife Broomhilda (Kerry Washington) is shown being dragged away and whipped by her captors.  Django himself is shown to be slick and inventive, sporting a hidden gun up his sleeve à la Travis Bickle in Taxi Driver.  He also utters a racially charged line that should probably be the tagline for the poster:  “Kill white folks and they pay you for it?  What’s not to like.”  Alas, even Tarantino knows where to draw the line.

Something tells me I should be highly offended by the idea of using slavery as fodder for a supercool revenge flick, especially when it’s coming from the self-appointed ambassador of grindhouse nostalgia.  Add to that the idea of the only Black female character being used as both the pawn of the male characters and the villain’s sexual plaything.  I am conscious of all the above, and yet I’m still unabashedly giddy about what I’ve seen.  Try though I might, I’m having a hard time overriding my fanboy impulses on this one.  I like the idea, the look, and the attitude.  Please, QT, don’t make me out to be a fool for giving you the benefit of the doubt.